Never, in my 34 years as a Labour councillor, have I seen Labour’s internal disciplinary procedures come under such scrutiny. The failure to adequately deal with serious cases of misconduct, in particular antisemitic abuse amongst members, has badly damaged the Labour Party’s reputation and once again inflamed tensions within the party.

Many Labour members will have been aware of individual cases dragging on for months or even years. Rumours of some members allegedly being auto-excluded for innocuous views on their favourite pop band, whilst others who have clearly endorsed and propagated grossly antisemitic content are allowed to remain as party members, have fuelled divisions in the party and turned the disciplinary process into a political football. I want to change that.

The truth is that no single individual or committee is responsible for the party’s shortcomings in dealing with disciplinary cases. It does nobody any good to heap sole responsibility on Jeremy Corbyn, Iain McNicol, Jennie Formby or indeed the national executive committee (NEC). In fact, the only group that should have any jurisdiction over contestable disciplinary cases is the NCC, which has a duty to interpret cases impartially and in accordance with Labour’s rulebook.

I welcome the expansion of the NCC as a first step to clearing the backlog of cases. But this change will only be effective if we elect committee members who have a proven track record of enforcing Labour’s rules (whatever their personal opinions on them) and are committed to judging cases impartially, without factional bias. Electing members to this committee who have their own strongly held views about individuals, or are even actively outspoken critics of recently codified guidelines on behaviour – such as the incorporation of the IHRA definition of antisemitism – will likely make the situation even worse, as confidence in the NCC’s ability to judge cases according to the rulebook is undermined.

Not only must grassroots members have confidence in the integrity of the NCC, but the other institutions of the Labour Party must have confidence in each other – from the leader’s office to Labour party branches. Electing a fair and impartial NCC will ensure that the various other institutions in the Labour Party will not feel the need to comment on, dismiss or in anyway unduly intervene in disciplinary cases, as they can be sure the judgement of the NCC will be legitimate and not factional.

I’m standing for Labour’s NCC at this crucial time for our party because members must have confidence in the governance and management of the Labour Party. We need to ensure there is a transparent, open and fair process for investigation into conduct and the the appeals process. We also must ensure that cases are heard swiftly to ensure that neither complainants nor those accused of misconduct are left in limbo for months on end.

I have gained valuable experience as both a member and chair of the South East Regional Board, where I have chaired appeals, investigations and selections for Westminster, local government and European elections.

I will always put the best interests of the Labour Party and its members first and I have the track record to prove it. I’d be very grateful for your CLP’s nomination/vote in this election. Please also consider supporting Malcolm Cunning, Joanne Harding, Caroline Hexter, Kirat Raj SIngh and Gillian Troughton. 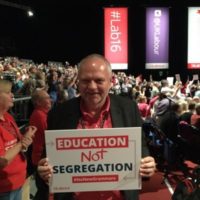 View all articles by Keith Dibble