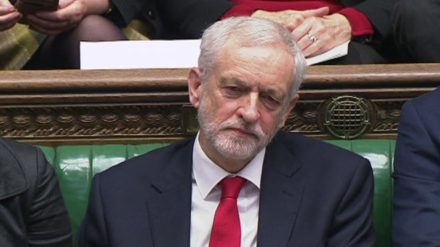 During PMQs today, viewers said Jeremy Corbyn appeared to describe Theresa May as a “stupid woman”.

Dramatic scenes followed in the Commons as a number of MPs made points of order on the matter, with Tories calling on the Labour leader to return to the chamber and apologise.

Speaker Bercow said he would review the video evidence and offer a ruling on the alleged incident after the two ministerial statements scheduled to take place this afternoon.

Bercow came under fire himself as Conservative MP Andrea Leadsom, with whom he has had fiery exchanges in the past, asked why he did not apologise when found to have called her a “stupid woman”.

Tory deputy chair James Cleverly tweeted condemnation of Corbyn’s “misogynistic language”, but it was pointed out that Philip Hammond was recently caught calling a female MP a “stupid woman”.

Commenting on the alleged incident, Corbyn’s spokesperson said: “He did not call her a stupid woman. He was saying ‘stupid people'”.

He added: “Lip-reading in such circumstances is always open to doubt. He is adamant that he did not say that. He has no time for any misogynistic abuse of any kind.”

The spokesman then asked the group of journalists in the ‘lobby huddle’: “Anyone interested in the serious crisis facing the country?”

Labour MPs including Laura Pidcock and Laura Smith spoke to defend Corbyn in the chamber.

This afternoon, I made a point of order, questioning use of Chamber time to obsess over a lip reading of @jeremycorbyn – transparently a tactic to divert attention from Govt’s shambolic rule. I think most of my constituents, like voters all over the UK, will find this pathetic. pic.twitter.com/qnk3tmN8ym

Laura Smith: “The level of hypocrisy in this place is quite astounding! On this side we have to put up with the most disgraceful insults thrown at us, & nobody more so than Jeremy Corbyn, who has to put up with it, day in day out!”