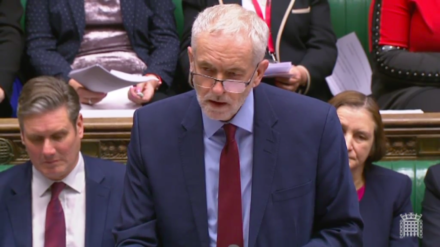 Theresa May’s visit to Brussels has actually made her deal less likely to pass, if that is even possible. The Prime Minister last night sought “reassurances” from the 27 EU leaders with an impassioned plea for help on the backstop, but Jean-Claude Juncker has described the UK’s position as “nebulous” and “imprecise”. Extraordinarily, it seems May is still asking the EU for suggestions rather than laying down her own concrete proposals.

European complaints of May’s ambiguity and imprecision sound remarkably similar to the criticisms levelled by her own backbenchers, who incidentally are more deeply divided than ever. In what will be music to the ears of many Remainer Labour MPs, The Times reports that Philip Hammond wants the Commons to be given free rein with votes on all possible options, including another referendum, while hard Brexiteers are threatening to go “on strike” next week, à la DUP.

The irony of the whole situation is that the chances of both no deal and another referendum are increasing every day, despite neither main leader wanting either of those outcomes. It has now been confirmed that there will be no meaningful vote before Christmas. By running down the Brexit clock, May is trying to bounce MPs into voting for the deal. But this strategy won’t work because at the same time, the EU (and many MPs) are trying to bounce her into extending or revoking Article 50. The PM continues to deny that is an option, but we all know her word is meaningless and no-deal preparations have been insufficient. Rightly or wrongly, parliament doesn’t believe the threat of no deal and is ready to call her bluff.

The Labour leadership continues to assess when would be the optimal time to table a vote of no confidence in the government. MPs who paused their VONC demands during the Tory leadership vote have now resumed pressure, and it looks like Keir Starmer’s team is pushing for it to be held before Christmas. But Jeremy Corbyn wants to strike when there’s a real chance of securing a win.

Some hope that when May updates MPs on Monday with nothing good to report from her EU excursions, the DUP and/or hardline Tories will have finally had enough and indicate a willingness to either abstain or even vote against the government. In the meantime, the run-up to recess will see Labour make life impossible for the government by taking advantage of Speaker Bercow’s disposition to granting urgent questions and debates. How much longer can May hold office without power?