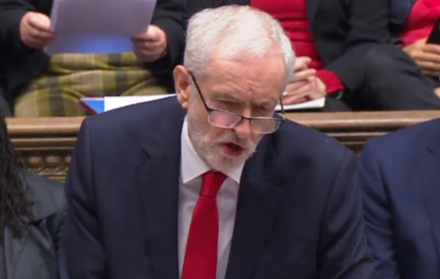 Merry Christmas, but you’ve plunged the country into crisis.

After paying tribute to the Lockerbie victims, Jeremy Corbyn kicked off the last PMQs of 2018 by confirming that his Christmas good wishes extended to members on the Tory benches. But he followed it up with a damning verdict of his opposite’s performance: “The Prime Minister has plunged this country into a national crisis. She refused parliament the right to vote on her Brexit deal. She said that she did that to seek further assurances. She failed.” With 100 days to go until the UK leaves the EU, no parliamentary approval for the withdrawal agreement and expensive emergency ‘no deal’ preparations taking place, the conclusion is difficult to argue with.

The Prime Minister is “running down the clock on the alternatives”.

In his very first question, Corbyn mentioned “the alternatives”. Careful listeners belonging to Labour’s pro-‘people’s vote’ camp may have been cheered by this choice of wording, but if so they are probably being overly optimistic. Corbyn’s mention of “alternatives” may be misinterpreted by Remainer Tories too. Anna Soubry later asked a question reminding MPs of the ‘indicative votes’ idea floated by a few cabinet members over the last week, which would give MPs free (unwhipped) votes on all Brexit options.

But the Labour leader has been clear in every interview that he does not favour a fresh referendum. And The New Statesman has today published a piece by Unite’s Len McCluskey, a close ally of Corbyn, that warns another public vote “risks tearing our society apart”. Corbyn’s “alternatives” are therefore more likely a reference to his alternative Brexit plan.

May can’t get “reassurances” from the EU if they’ve been ruled out and there are no further European Council meetings.

The crux of Corbyn’s argument at PMQs was designed to cause anxiety amongst Tory and DUP MPs. The Labour leader put his finger on the main problem for May: “Can the Prime Minister explain to us when the European Council will meet to approve the changes that they have already ruled out?” He later added: “There are no meetings of the European Union Council scheduled until March 21st. And the EU has been very clear there are no more negotiations, clarifications, or meetings. She will be bringing back the same deal she pulled last week.”

May tried to mock Corbyn (“There are some people who say the leader of the opposition is just going through the motions – this week he hasn’t even done that”). However, the key fact remains that, without something substantial from the EU on the backstop, her Conservative colleagues will struggle to row back on their promises not to vote for her deal.

The camera caught Corbyn appearing to call May a “stupid woman” at the end of the session. According to his spokesman, the Labour leader actually said “stupid people”, but the row about the comment is now likely to overshadow all of the above.