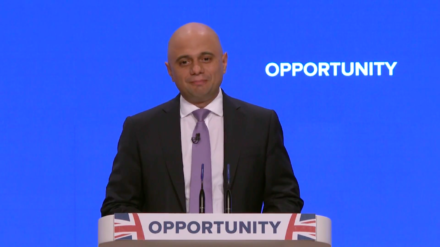 “There is no specific target.” So the ‘hundreds of thousands’ objective has been abandoned? “We remain committed to our manifesto.” Home Secretary Sajid Javid couldn’t keep his story straight in his shambles of an interview on Radio 4’s Today this morning. Theresa May has stubbornly refused to acknowledge (stop me if you think you’ve heard this one before) that her net migration target, which has proved to be unrealistic as well as unwise, should be dropped in the face of criticism from all sides.

The Prime Minister has been fixated on bringing down immigration levels in the UK since being Home Secretary herself, and her ‘under 100,000 pledge’ has been in place since 2010, though the Tories haven’t come close to achieving it. May’s blinkered view of this policy area has caused untold harm: the ‘Go Home’ vans; the hostile environment; the Windrush scandal. And her Home Secretary is too ashamed of her target to say it on Radio 4, although it remains party policy.

It has taken 18 months but the government finally releases its white paper on immigration today. You’d think that after multiple delays its proposals would have been agreed on and settled, but we’re talking about this chaotic government. Another year of consultation will be undertaken, and cabinet members are divided over the central proposal – a minimum salary threshold of £30,000 a year, applied to EU as well non-EU workers, for five-year visas.

This is being pitched as a skills-based immigration system, but senior ministers as well as Labour point out that this is actually income-based. As Diane Abbott commented: “The government has disgracefully labelled workers on less than £30,000 as low-skilled. Our economy and public services are kept ticking by this majority of workers.” The Tory post-Brexit system would exclude nurses, social care workers and other staff in key sectors “in which we have severe skills or labour shortages”.

Most people assume Javid’s opposite, the left-wing Diane Abbott, will respond to the Tories with a simple pro-immigration message. They’re right to think the Shadow Home Secretary, and Jeremy Corbyn’s Labour Party more widely, wouldn’t resort to dogwhistle racism or pander to prejudice. It doesn’t have a numerical target. But Labour’s alternative is more nuanced than often assumed – the party pledged hundreds of extra border guards in the last manifesto, for instance. What could be made clearer is that Tory management of immigration is not only unfair, damaging to society and dangerous for individuals, but also unworkable.

The Home Office is not fit for purpose, and that’s partly down to the complicated, punitive nature of our current rules. As a parliamentary caseworker, I remember one constituent who we were told was a terrorist who had participated in acts classified as crimes against humanity. Yet he had discretionary leave to remain granted repeatedly while the Home Office considered his application – because the department is that overwhelmed. This is the kind of story those concerned about immigration would be horrified by, and its events are more likely under a dysfunctional system presided over by this government. So much for the Tories being tougher on immigration.