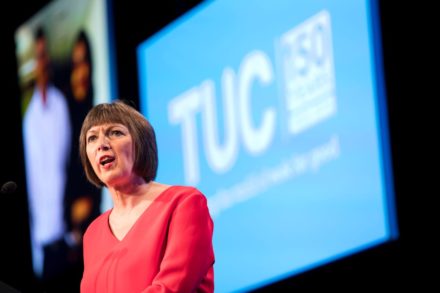 Frances O’Grady has sent MPs a letter setting out the reasons for which trade unions will not be supporting the final Brexit deal and why parliament shouldn’t either.

The general secretary of the Trades Union Congress (TUC) shared a copy of the open letter on her Twitter page on Friday, saying that “this is a bad deal for working people.” 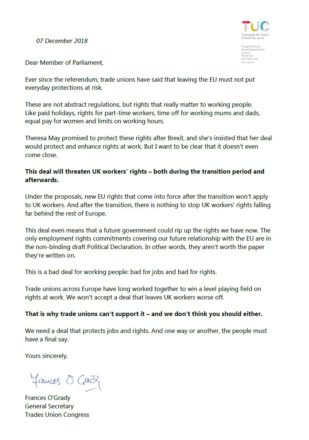 In the letter, O’Grady notes that “after the transition, there is nothing to stop UK workers’ rights failing far behind the rest of Europe”.

She added: “The only employment rights commitments covering our future relationship with the EU are in the non-binding draft Political Declaration. In other words, they aren’t worth the paper they’re written on.”

Her letter received widespread support from Labour MPs and grassroots organisations, who shared it widely on social media.

Wirral South MP Alison McGovern retweeted the letter with the message: “Everyone listen to Frances.”

The pro-Remain groups Best for Britain and Another Europe is Possible also shared O’Grady’s tweet labelling the comments a “vital intervention”.

The TUC hopes the letter will encourage MPs to vote against Theresa May’s final deal, which is set to come to the Commons on Tuesday, December 11, for debate.