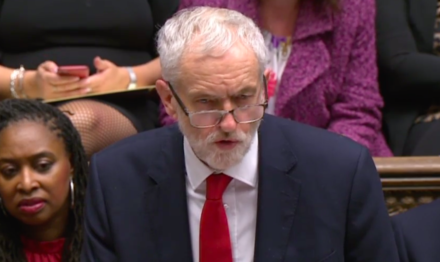 Below is the full text of Jeremy Corbyn’s speech opening the debate to move a motion of no confidence in the government.

Mr Speaker, I move the motion that this House has no confidence in Her Majesty’s government. Last night the government was defeated by 230 votes. The largest defeat in the history of our democracy. The first government to be defeated by more than 200 votes.

Mr Speaker, the Prime Minister has consistently claimed that her deal, which has now been decisively rejected was good for Britain, workers, and businesses. If she is so confident of that, if she genuinely believes it, she should have nothing to fear from going to the people and letting them decide.

In this week, in 1910, the British electorate went to the polls. They did so because Herbert Asquith’s Liberal government had been unable to get Lloyd George’s People’s Budget through the other place. They were confident in their arguments and went to the people and were returned.

It is still how our democracy works. When we have a government that cannot govern, in the absence of a written constitution, it is these conventions that guide us. If a government cannot get its legislation through parliament, it must go to the country for a new mandate and that must apply when it is on the key issue of the day.

We know the Prime Minister is not against snap elections on principle because she herself went to the people in 2017, saying “Give me the mandate I need”. She bypassed the Fixed Term Parliament Act, which was, as my Rt Hon Friend the Shadow Foreign Secretary pointed out, designed to give some stability to the Tory-Lib Dem coalition government, to ensure that the Lib Dems couldn’t hold the Conservatives to ransom by constantly threatening to collapse the coalition.

And a shocking first for this government is forcing a heavily pregnant member of this House to delay a scheduled caesarean to come to vote and all because of their cynical breaking of the trusted pairing arrangements in this House, which have endured for decades.

Nothing demonstrates the sheer incompetence of this government quite like the Brexit negotiations. Yesterday’s historic and humiliating defeat was the result of two years of chaos and failure. It is now clear this government is not capable of winning support for its core plan on the most vital issue facing this country.

The Prime Minister has lost control and the government has lost the ability to govern. Within two years they have managed to turn a deal from what was supposed to be ”one of the easiest in human history” into a national embarrassment.

In that time we have seen the Prime Minister’s demands quickly turned into one humiliating climb-down after another. Brexit ministers have come and gone but the shambles has remained unchanged, culminating in an agreement which was described by one former Cabinet minister as “the worst of all worlds”.

Let’s be clear, the deal the Prime Minister wanted this parliament to support would have left the UK in a helpless position, facing a choice of either seeking and paying for an extended transition period or trapped in the backstop.

The Prime Minister may claim the backstop would never have come into force but who has confidence in this government’s ability to negotiate a future trade deal with the EU by December 2020 after the shambles we have all witnessed over the past two years?

This Frankenstein deal is now officially dead and the Prime Minister is trying to blame everybody else. Mr Speaker let me be clear the blame for this mess lies firmly at the feet of the Prime Minister and her government, which time after time has made hollow demands and given false promises.

They say they want this parliament to be sovereign, yet whenever their plans have come up against scrutiny, they have done all they can to obstruct and evade. The Prime Minister’s original plan was to push through a deal without the appropriate approval of this parliament only to be forced into holding a meaningful vote by the courts and by members of this House.

Mr Speaker, since losing its majority in the 2017 general election the government has had numerous opportunities to engage with others and listen to their views, not just here in Westminster but across the country. Yesterday’s decisive defeat is the result of the Prime Minister just not listening, ignoring businesses, trade unions and members of this House.

Instead she has wasted two years recklessly ploughing on with her doomed strategy. And even at the last, when it was clear her botched and damaging deal could not remotely command support here or across the country, she decided to waste even more time by pullingthe meaningful vote on the empty promise of obtaining legal assurances on the backstop.

Some on the government side have tried to portray the Prime Minister’s approach as stoical. Mr Speaker, what we have seen over the past few months is not stoical. Instead what we have witnessed is a Prime Minister acting in her narrow party interest, rather than the public interest.

Her party is fundamentally split on this issue, constraining the Prime Minister so much that she simply cannot command a majority in this House on the most important issue facing the country, without rupturing her party. And it is for this reason that this government can no longer govern.

Yesterday the Prime Minister shook her head when I said that she had treated Brexit as a matter only for the Conservative Party. Yet within half an hour of the vote being announced, the Hon member for Grantham & Stamford (Nick Boles) commented: “She has conducted the argument as if this was a party political matter rather than a question of profound national importance”. I know many people across the country will be frustrated and deeply worried about the insecurity around Brexit but if this divided government continues in office the uncertainty and risks can only grow.

And Mr Speaker it is not just over Brexit that the government is failing dismally letting down the people of this country. There has been the Windrush scandal the shameful denial of rights the detention and even the deportation of our own citizens. The government’s flagship welfare policy Universal Credit is causing real and worsening poverty. And just yesterday under the cover of the Brexit vote they sneaked out changes that will make some pensioner households thousands of pounds worse off.

Those changes build on the scourge of poverty-causing measures inflicted on people in this country: the bedroom tax, the two child limit and abominable rape clause, the outsourced and deeply flawed Work Capability Assessment, the punitive sanctions regime and the repugnant benefit freeze.

People across the country, whether they voted Leave or Remain, know that the system isn’t working for them. Food bank use has increased almost exponentially and more people are sleeping on our streets the numbers have shamefully swelled every year. They used to be the party of home ownership, now they’re the party of homelessness.

Care is being denied to our elderly with Age UK estimating at 1.2 million older people are not receiving the care they need. £7bn has been cut from adult social care budgets since 2010.

Our NHS is in crisis, waiting time targets at A&E and for cancer patients have not been met since 2015. They have never been met under the government of this Prime Minister. The NHS has endured the longest funding squeeze in its history, leaving it short-staffed to the tune of 100,000 and NHS trusts and providers in over £1bn deficit.

And the human consequences are clear. Life expectancy is now going backwards in the poorest parts of our country and stagnating overall. This is unprecedented. Another shameful first for this government.

Mr Speaker, I know some members of this House are sceptical and there are sceptical members of the public, but I truly believe that a general election would be the best outcome for this country. As the Prime Minister pointed out in her speech yesterday both the Labour Party and the Conservative Party stood on manifestos that accepted the result of the referendum. Surely any government would be strengthened in trying to renegotiate Brexit by being given a fresh mandate from the people for their chosen course?

I know many people at home will say we have had two general elections and a referendum in the last four years. For the people of Scotland it is two UK-wide elections, one Scottish Parliamentary election and two referendums in five years. So while Brenda from Bristol may gasp “not another one?”, spare a thought for Bernie from Bute. But Mr Speaker the scale of the crisis means we need a government with a fresh mandate.

A general election can bring people together, focus on all the issues that unite us, the need to solve the crises in our NHS our children’s schools and the care of our elderly.

And we all have a responsibility to call out the abuse that has become too common whether that’s the abuse of members of this House going about their business or the racist abuse and attacks that too many of our constituents have faced since the toxic debate of the last referendum and this government’s hostile environment policies.

Mr Speaker, I pay tribute to all members of this House who, like the Labour frontbench, are committed to both opposing the Prime Minister’s bad deal and ruling out the catastrophe of ‘No Deal’. But I do believe that following the defeat of the government’s plan, a general election is the best outcome for the country, as the Labour Party conference agreed last September.

A general election would give new impetus to negotiations, a new Prime Minister with a new mandate, able not just to break the deadlock on Brexit but to bring fresh ideas to the many problems facing our constituents:  low pay and insecure work, Universal Credit and rising poverty, the scandal of inadequate care for our elderly, the crisis of local councils, health services and schools starved of resources, the housing and homelessness crisis.

Mr Speaker, if the House backs this motion today, then I welcome the wide-ranging debates we will have about the future of our country and the future of our relationship with the European Union. As I said before, a Prime Minister confident of what she describes as “a good deal” and committed to tackling burning injustices should have nothing to fear from such an election.

But Mr Speaker, if the House does not back this motion today then it is incumbent on all of us to keep all options on the table that rule out a disastrous ‘No Deal’, and to offer a better solution than the Prime Minister’s deal which was so roundly defeated yesterday.

This government cannot govern and cannot command the support of Parliament on the most important issue facing our country. Every previous Prime Minister in this situation would have resigned and called an election and it is the duty of this House to lead where the government has failed.