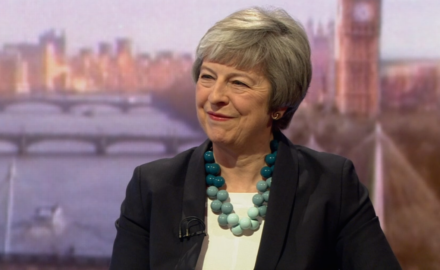 “I have been clear with my colleagues… Two things: One, I am not going to call a snap election, and secondly I am not going to be leading the party in to the 2022 general election” Theresa May tells #marrhttps://t.co/RVlA6DlwPF pic.twitter.com/pP0nNViH16

“We are committed to voting against Theresa May’s #Brexit deal. Goodness knows whether we’ll actually have a vote on it next week given the speculation in the newspapers again” – Labour’s Jon Ashworth says https://t.co/e6R2HdKpIT #marr pic.twitter.com/LDlUzUSFAg

“The People’s Vote is your route to stop our country crashing out of the EU in a very disastrous way” – @ChukaUmunna tells #Ridge he is “open-minded” about whether a second referendum would have 2 or 3 options.

“What’s your feeling on a second referendum? Would you like to see one?” – Sophy #Ridge asks @BarryGardiner about the People’s Vote, discussed by @ChukaUmunna earlier.