Amid all the motions and votes taking place in the Palace of Westminster, a meeting recently took place across the road in Church House about the “Future of Business”. Hosted by the Labour Business and Social Enterprise UK, the meeting was addressed by Labour’s business spokesperson Rebecca Long-Bailey, shadow Treasury minister Anneliese Dodds and shadow small business minister Bill Esterson.

To a gathering of social enterprises, local councillors, NGOs and journalists, Labour Business and Treasury spokespeople showed that despite all the noise around Brexit, the party is not getting distracted from its goal of reshaping our economy.

There has been a lot of discussion in Labour Party about the “Institutional Turn” that leading figures such as John McDonnell have made. One of the glaring failings of New Labour was that although it did good work in redistributing the “proceeds of growth” from the City and big business, it didn’t fundamentally change the structure of the economy to prevent inequality, poverty and environmental exploitation taking place, and this is desperately needed.

But what does this mean in practice? In June 2017, Labour launched a new report on “Alternative Models of Ownership”. This received a lot of positive attention both then and at the State of the Economy conference in May 2018, but bar the “Inclusive Ownership Fund” announced at Labour Party conference last year, there has been little else contributed in the public domain.

This changed when we saw the Shadow Business Secretary make a bold speech on the future of the economy last month, making clear that Labour will go into government with the view of shaking up business as usual. Her speech quite rightly contained flashes of anger around the exploitation of workers and low wages. But there was greater emphasis on the need for new types of businesses to emerge in order to create a fairer society.

“We are putting social enterprise at the heart of our economic policy making,” Rebecca Long-Bailey said. “Social enterprise is integral to our Industrial Strategy.” Social enterprises – businesses that have a legal mission to improve society and must reinvest the majority of their profits back into their community rather than giving them away to shareholders – are a rapidly growing part of the economic landscape. There are now over 100,000 of them according to the latest research and they contribute over £60bn to UK GDP. Yet this is still less than 3% of the total UK economy.

Alongside embracing co-operative models of ownership, promoting social enterprise more broadly now appears to be another major plank in the Labour Party’s economic policy. This is an important shift as although co-operatives help to tackle issues around worker exploitation and control, they don’t necessarily deal with challenges we are facing around inequality and the need to protect the environment. Social enterprises also have the potential to infiltrate a greater share of our economy, not only in traditional co-operative spaces such as retail, but also parts of the tech economy, business support and finance.

Social enterprises are a radical challenge to the way that the economy operates overturning the divisions between society, owners and workers. It’s about practically building a “stakeholder” model of capitalism. By embracing them, Labour is showing its commitment to fundamentally shaking up the UK economy beyond repeating the debates of the past.

How is this to be done? Shadow Treasury minister Anneliese Dodds stressed the need for reforming the tax system so that businesses have a genuinely level playing field. This is a critical point as warm words will only go so far. Many social enterprises and co-operatives are fighting with one arm tied behind their back, on the one hand paying staff well and sourcing supplies ethically but having to compete on price against businesses which are undercutting them and dodging their taxes as well. Tax reform is central to any reform of business in the UK.

Shadow small business minister Bill Esterson highlighted the need for social enterprise to be seen as a natural way of doing business. This culture point is also important. Labour has a chance to empower communities by overturning traditional motivations behind setting up a business. Rather than business start-ups being dominated by men looking to make a quick buck, we should encourage people to see business as a way of making a positive contribution to society. We know that social enterprises are, for example, more likely to be led by women, BAME citizens and those with disabilities. Embracing new models of business will further Labour’s commitment towards greater equality.

As the possibility of a general election grows, we should take heart from the Labour Party’s ongoing commitment to reshaping our economy. Whatever happens on Brexit, the party must not be distracted from its central mission to build a better society that works for the many, not the few. 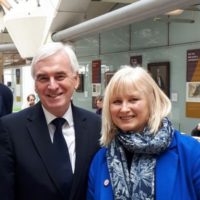