The Labour left slate won almost all the London regional board positions up for election, it was revealed at Labour London conference this weekend.

The slate of candidates backed by Momentum won all positions except one in ‘Section 7’ (the London Assembly constituencies of Barnet & Camden and Brent & Harrow), which went to Jewish Labour Movement activist Izzy Lenga, and that of disabilities officer, taken by Unite-backed Sean McGovern over Momentum-endorsed Robert Lugg.

Corbynsceptics will now be concerned that London mayor Sadiq Khan could face a hostile Labour group in 2020, and that decisions on issues such as rerunning local party AGMs and membership application appeals will not go in their favour.

There was some controversy over the socialist society place, as the Fabian Society, which has the largest vote in the section, took the seat off the Jewish Labour Movement. It was won by Fabian staffer Alex Sanderson rather than JLM’s Peter Mason, who tweeted that they had “asked @thefabians for solidarity, sadly they chose not to give it”.

There were few contentious motions. One on climate change, moved by Hackney North CLP, endorsed “halting airport expansion” (which particularly applies to Heathrow). It only narrowly passed: Unite and GMB voted against, while Unison voted in favour along with smaller unions.

The emergency motion to “Stop Tory Brexit damaging London’s communities” was approved with almost 80% votes in favour. It urged MPs to extend Article 50 and vote for a ratification referendum including a ‘Remain’ option. 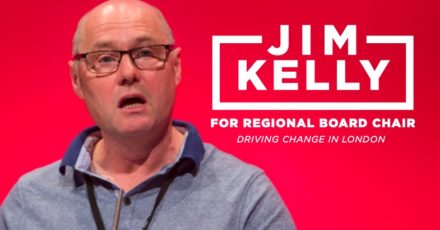 Below is the full list of London Labour regional board election results.