ASLEF launched its new report, On Track With Diversity, today. According to Britain’s trade union for train drivers, only 6.5% of train drivers in England, Scotland and Wales are women, just 8% are from an ethnic minority and as little as 15% are under 35.

In the introduction to the report, which recommends a series of measures to tackle the lack of diversity, general secretary Mick Whelan said he wanted “fewer people who look like me” – i.e. “middle-aged, male, and white” – in the industry.

He celebrated statistics compiled by the Government Equalities Office, which show that train driving has the smallest gender wage gap of any occupation in the UK – at 0.7%, compared to the overall gender pay gap of 18.4%.

As highlighted by Labour MP Jo Stevens – chair of the ASLEF parliamentary group – at the report launch in parliament this afternoon, the low pay gap is explained partly by the high level of unionisation among train drivers.

In the report foreword, Whelan explained: “Although nobody has to belong to a trade union, 96% of the train drivers in England, Scotland and Wales choose to be members of ASLEF.”

However, he also argued that the industry must improve its recruitment policies, and that the report’s recommendations are needed. Its suggestions for train operating companies include gathering and monitoring data, appointing champions for under-represented groups and introducing staff networks.

“ASLEF has been at the forefront of promoting diversity in our industry,” Whelan wrote, “and we will continue to work with the train and freight operating companies to ensure that train drivers are more representative of the communities they serve in 2020 than they have been in the past”. 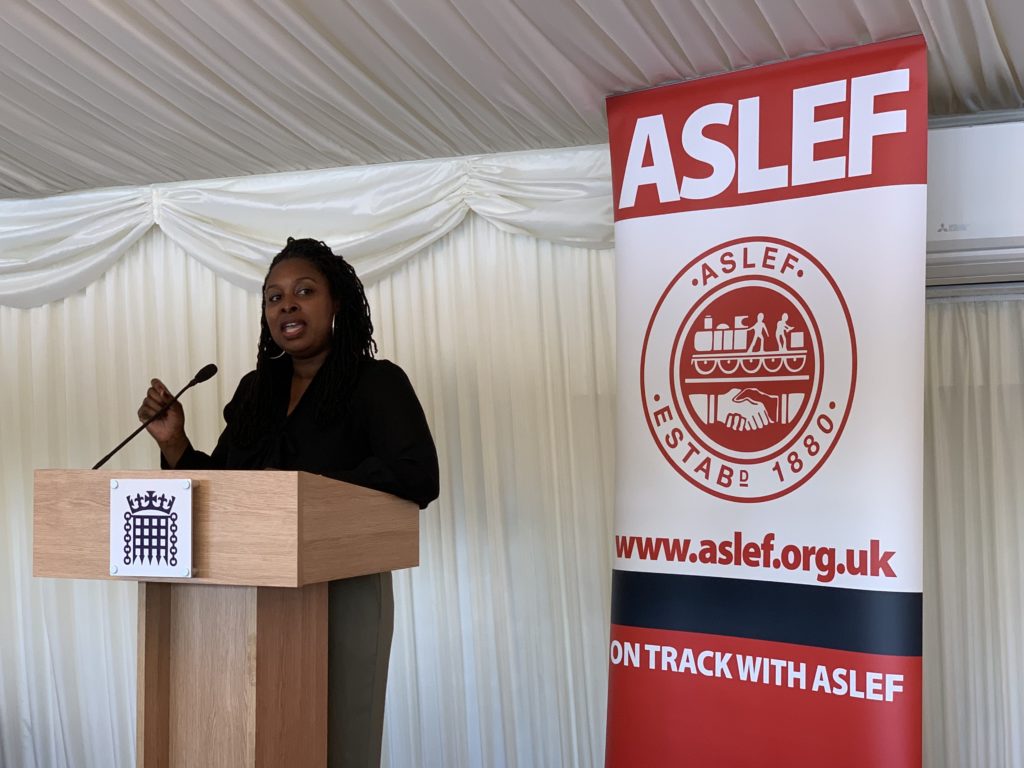 Labour frontbenchers Dawn Butler, Rachael Maskell and Jo Stevens spoke at the launch, which was attended by a number of other Labour MPs including Andy McDonald, Sarah Jones, Louise Haigh, Tonia Antoniazzi and Lisa Forbes.

“We have got to change the culture of the railway industry,” Maskell, who is part of Labour’s transport team, told the parliamentary reception. While commending ASLEF for commissioning the report, she said: “I am fed up going to events and being perhaps the only woman in the room.”

The MP for York Central pointed out that “there’s no shortage” of women and BAME workers in the rail industry. “But they’re segregated in low-pay jobs, cleaning our trains. Why can’t they drive our trains? Until they are driving our trains, our work isn’t done.”

Labour’s equalities spokesperson Butler spoke next. She praised Whelan’s leadership on diversity, arguing: “We need white men to use their privilege well.”

Referring to the ongoing Tory leadership contest, the Shadow Women and Equalities Secretary said: “It doesn’t matter which one of those mopheads wins and goes into Number Ten. They’re not going to help progress quality.”

ASLEF backed Leave in the 2016 referendum. But Whelan, a member of Labour’s national executive committee, expressed concern last year that the type of Brexit being endorsed by the Tory government would “leave us in a worse position” with fewer workers’ rights and lower labour standards.