The Panorama episode titled ‘Is Labour antisemitic?’ aired tonight on BBC One. It chronicled incidents relating to antisemitism within the Labour Party since the election of Jeremy Corbyn as leader in 2015, covering both previously reported news stories – such as the Kayla Bibby case – and new claims by members and former staffers, covered in detail on LabourList earlier.

The programme focussed on Corbyn’s communications director Seamus Milne, who was quoted as writing in an email to HQ that “something’s going wrong, and we’re muddling up political disputes with racism… I think going forward we need to review where and how we’re drawing the line”.

However, a Labour spokesperson said Panorama had “deliberately misrepresented this correspondence” as the full sentence read: “But if we’re more than very occasionally using disciplinary action against Jewish members for anti-Semitism, something’s going wrong, and we’re muddling up political disputes with racism.”

The email was interpreted as “an instruction” and “the leader’s office requesting to be involved directly in the disciplinary process”, according to Sam Matthews, who was head of disputes at the time. Matthews also told Panorama that he had considered attempting suicide at Southside HQ as a result of the working environment.

Particular attention was also paid to the role of Thomas Gardiner, the head of Labour’s governance and legal unit. It was claimed in the film that he was given a veto over which antisemitism complaints were investigated, and former staffer Dan Hogan described him as a “representative” of the leader’s office in Labour HQ. But Labour strongly denied any suggestion that he was a ‘political overseeer’.

Jeremy Corbyn did not contribute to the programme himself. Instead, frontbencher Andrew Gwynne – often seen as one of the more ‘centrist’ shadow cabinet members (in Labour terms) – was sent as a representative of the party.

When asked whether 15 expulsions of antisemites over three years was sufficient evidence of Labour having “dealt with this crisis”, Gwynne explained that many cases are still ongoing and that some members going through the disciplinary process leave the party before their case is concluded. “15 fewer racists and people who hold obnoxious views, I think, is important,” he said. “We are serious about getting shot of this problem.”

On the subject of whether the Labour leader is personally antisemitic, the frontbencher said: “I don’t believe that Jeremy is antisemitic… He is a passionate believer in equality, in ensuring that hatred and intolerance is tackled.”

Gwynne was criticised by a Labour councillor on Twitter for his contribution to the episode. He replied to the tweet with an extract of the interview transcript, but this only attracted further reproval.

The programme also featured Louise Ellman MP and author Dave Rich, as well as Labour activists including Izzy Lenga, Rachel Megan Barker, Joshua Garfield, Rebecca Filer and Phil Rosenberg, who spoke about antisemitic behaviour at local party meetings such as Holocaust denial. Some Corbynites such as Umaar Kazmi commented that these contributors were not on the left of the party, while many other members and MPs including Stella Creasy praised them for speaking out.

A number of Corbyn supporters doubted the authenticity of the briefing, but Waugh reported that it was “sent to ‘digital outriders’, who are a network of… Corbyn’s most loyal and active ‘grassroots’ supporters online” and not to journalists or commentators such as Owen Jones.

High-profile Corbynites such as Matt Zarb-Cousin dismissed the claims made in the programme, accusing it of misrepresenting facts and doctoring leaked emails. In contrast, deputy leader Tom Watson reacting to the episode saying he was “shocked, chilled and appalled” and stated that there were “very serious questions to be answered urgently”.

Watson tweeted: “Hearing the testimony of party members and former staff was harrowing. They are not “disaffected”, they have been incredibly brave. Very serious questions now have to be answered.”

Similarly referring to the Labour spokesperson quotes issued in response to the programme, ‘soft left’ backbench MP Lisa Nandy tweeted: “I know some of the staffers on tonight’s Panorama. They joined the Labour Party, like me and most party members, because they hate racism as much as they hate poverty. A statement accusing them of having “political axes to grind” is deeply wrong and indefensible.”

Mike Katz, chair of the Jewish Labour Movement, sent an email to all members of the organisation with the subject line ‘Panorama: racism laid bare’. He wrote: “After seeing tonight’s programme, no one can doubt that Labour is institutionally racist against Jews… We must see action – sackings, suspensions and CLPs put in special measures.”

During the programme, Labour Press Team tweeted: “We completely reject any claim that Labour is antisemitic. We stand in solidarity with Jewish people…” and added: “Allegations of interference in Jackie Walker case are entirely untrue. Former staffer delayed, Jennie Formby urged speed.”

As it came to an end, the same official account also tweeted that the programme was “proof… that the Labour Party IS institutionally racist”. The tweet was soon deleted and another was posted saying that the account had been hacked. 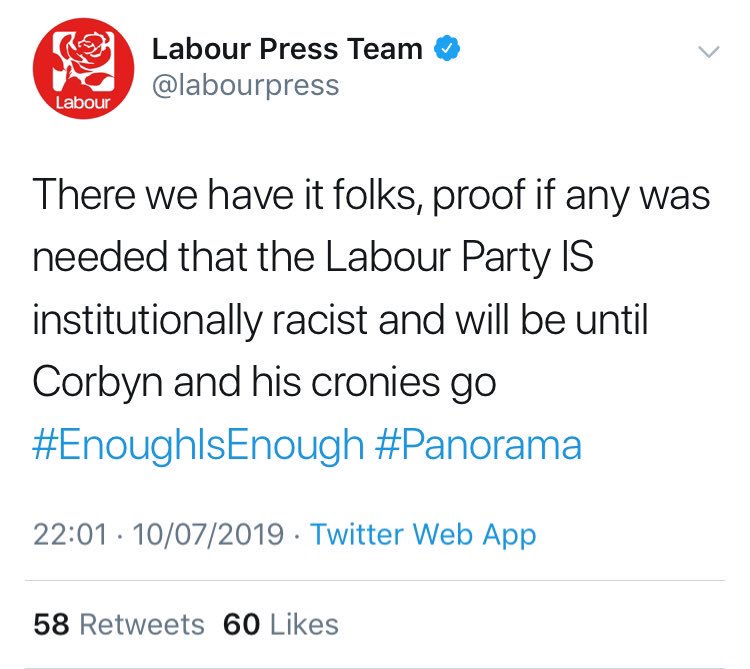 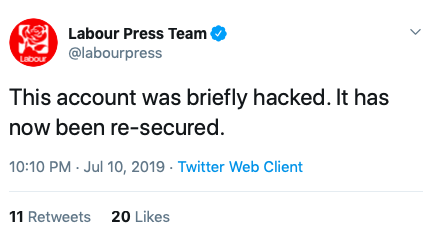 After the programme aired, a Labour spokesperson issued a full response, which read: “We completely reject any claim that Labour is antisemitic. We stand in solidarity with Jewish people, and we’re taking decisive action to root out antisemitism from our movement and society.

“The Panorama programme was not a fair or balanced investigation. It was a seriously inaccurate, politically one-sided polemic, which breached basic journalistic standards, invented quotes and edited emails to change their meaning. It was an overtly biased intervention by the BBC in party political controversy.

“An honest investigation into antisemitism in Labour and wider society is in the public interest. The Panorama team instead pre-determined an answer to the question posed by the programme’s title. No proper and serious attempt was made to understand our current procedures for dealing with antisemitism, which is clearly essential to reach a fair and balanced judgement. And Panorama distorted and manipulated the truth and misrepresented evidence to present a biased and selective account.

“We complained in advance to the BBC over the way the programme was put together and its choice of a presenter who has expressed overt personal and political hostility to Jeremy Corbyn’s politics. We will be pursuing complaints at every level.

“The Labour Party will fully investigate any complaints concerning the antisemitic incidents reported by party members in interviews in the programme. Labour stands in solidarity with Jewish people and is fully committed to the support, defence and celebration of the Jewish community and its organisations.

“Despite claims made in the programme, Labour is taking decisive action against antisemitism. Since Jennie Formby became general secretary the rate at which antisemitism cases have been dealt with has increased more than four-fold. We will build on the improvements to our procedures made under Jennie Formby, and continue to act against this repugnant form of racism.”