Yesterday’s resignation of British Ambassador Kim Darroch marks a low point in Anglo-American relations during the Trump Presidency. Driven in part by the inability of putative Prime Minister Boris Johnson to support him, Darroch has understandably found it “impossible for me to carry out my role as I would like”. When the President of the United States declares he will no longer deal with the UK’s appointed representative, it is difficult to argue with Darroch’s logic.

The furore was initially driven by leaked emails in which Darroch described the White House as “dysfunctional… unpredictable, diplomatically clumsy and inept”. Such sentiments would already have been familiar to the four million people who have read Michael Wolff’s Fire and Fury, and hardly constitute breaking (or indeed ‘fake’) news. But they also form standard diplomatic fare. It is the job of diplomats to report home the nature of the political system in which they find themselves, and for such correspondence to remain secret. The leakers of that material, and those who have printed it, have a lot to answer for.

In my forthcoming book March of the Moderates, which details the relationship between Tony Blair and Bill Clinton, I outline the nature of the telegrams being sent home by British Ambassadors in the 1990s. The book shows that until the late summer of 1992, the British Embassy thought Clinton didn’t have a cat in hell’s chance in his election fight against George H.W. Bush, and ‘could yet be unhorsed by some new scandal.’  In June 1992, Jonathan Powell – later to work for Blair but then at the Washington Embassy – even argued that a Clinton administration was “far fetched”.

But such diplomats were able, correctly, to keep such potentially controversial views behind the scenes. Those of a certain age may recall that it was actually John Major, in allowing the Bush team to dig into British Home Office material on Clinton’s old student days in Oxford, who politicised that same election. To his credit, once in power, Clinton got over it, and worked well with Major on issues like Northern Ireland – even when tacitly pulling for Blair and New Labour. Everyone acted like adults.

Normally American politicians have thicker skins than Trump – in fact, frank diplomatic discussion rest on this. Human beings can, after all, sometimes say the wrong thing. During his 1996 visit to D.C., whilst still leader of the opposition, Blair told Clinton and his entourage that he had “visited Wall Street yesterday and saw the hard-faced men of banking”. Sensing the former Goldman Sachs presence over his shoulder, British Ambassador John Kerr jokingly remarked, “watch out, Secretary [Bob] Rubin is here”. There was of course no Twitter to take to back then, but Rubin was fortunately able to grin and see the bigger picture. Trump would probably have stormed off, or chucked Kerr out of the room.

The current climate is dangerous. Diplomats remain vital to functioning democracies. In throwing our current British Ambassador under the bus, Boris Johnson has shown where his bread is buttered. Trump has long made clear his only diplomatic priority is America First and therefore screwing the other guy. The fact that his mother was born in Scotland, or that he owns Turnberry, or any other bits of trivia, don’t change that basic fact.

Boris Johnson’s motivations are arguably every bit as clear. Whatever one’s views on, say, Blair’s decision to join the US invasion of Iraq, it did gain him serious leverage with the Bush White House on issues such as climate change and international development. These later bore fruit with the Gleneagles package of reforms, including $50bn of additional aid and debt relief for Africa. When it comes to pleasing the current president, Boris just seems to want a job and, maybe, a trade deal. But empowering a diplomatic chicken to trade in chlorinated ones doesn’t feel like a positive scenario right now. 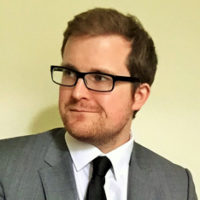 Richard Carr is a senior lecturer in history and politics at Anglia Ruskin University, and author of the forthcoming book 'March of the Moderates: Bill Clinton, Tony Blair, and the Rebirth of Progressive Politics'.