Gloria de Piero, who said: “A lack of tolerance for different viewpoints in the Labour Party frankly worries me”…

‘Surely you can find candidates in high profile seats who haven’t made offensive comments about Jewish people in the past?’ – @SophyRidgeSky pushes @RichardBurgon on why Labour is supporting Ali Milani. #Ridge

There were no representatives of the Labour Party on the programme this week. 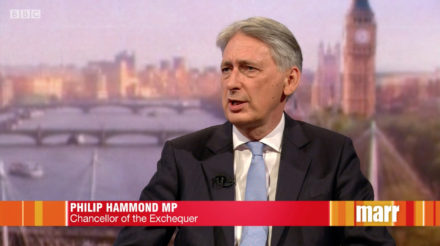 Philip Hammond confirmed reports that he will be resigning as Chancellor once Theresa May has resigned as Prime Minister, in the expectation that she will be succeeded by Boris Johnson. Justice Secretary David Gauke has also said he will resign.

The chancellor Philip Hammond tells #Marr that he is going to hand in his resignation to Theresa May this week #Brexit https://t.co/PpcNG358T3 pic.twitter.com/eMYhQ9XLcy

Simon Coveney, deputy Prime Minister of Ireland, reiterated Ireland’s opposition to removing the backstop from the deal and dismissed the ‘GATT 24’ solution.

John McDonnell discussed his proposed ‘insourcing revolution’. Asked whether councils would be forced to take on services even if they are currently well-provided by a private company, the Shadow Chancellor said the “preference will be in-house” but councils would “be able to outsource” if they “haven’t got capacity to deliver” the services or it’s a specialist area. The company, however, should pay their staff the living wage, treat employees properly and be regulated, he said.