Student Labour members have fought the undemocratic, cliquey and incompetent practices of the the party’s official student wing for far too long. Clubs should have disaffiliated some time ago, but not many have been brave enough to admit it.

When Aberystwyth’s University Labour Club put a motion to the Labour Students national conference in February 2012 that called for the organisation to adopt a system of one-member-one-vote (OMOV), Ed Miliband’s Labour was on 40% in the polls, Manchester City hadn’t won a league title in 44 years and Labour Students had been mired in controversy and criticism for its lack of transparency and democracy. Some things change; others don’t.

A watered-down version of that OMOV motion passed in 2012. A clear OMOV motion passed in 2016, and it is now included in the constitution of Labour Students. But in the time between that 2012 conference and the launch of Labour Students Left on June 18th last year, we’d seen delay after delay, broken promise after broken promise, and nothing to convince us that the change would be implemented any time soon. LSL’s intention was to put forward a set of candidates in the 2019 Labour Students elections who would stand on a broad platform of finally delivering a democratic, member-led organisation.

After a meeting of their national committee in October, Labour Students announced that their 2019 elections would be run by OMOV. This was plain deception at best. While we proposed a plan that would use the Labour Party’s student membership list (there are said to be nearly 20,000 of us), the committee’s version of OMOV forced both university Labour clubs and members to jump through an incredible number of hoops in order to gain eligibility.

The end result was halving the number of eligible clubs to just 42, and then in turn reducing the electorate down from what could potentially be many thousands to just a couple of hundred. Some members who had successfully cleared all the hurdles reported that they were simply never sent their ballots. The principle behind OMOV is inclusive democracy – clearly, around 250 out of 20,000 falls far short of that.

And yet those unfamiliar with Labour Students would have been forgiven for feeling confident about the ensuing elections and assuming that our seven candidates for the national positions were on course for a landslide win. On average, LSL-backed candidates received the nominations of 28 out of the 42 eligible Labour clubs, giving the impression they were set to beat the ‘preferred’ Labour Students candidates with around 65-70% of the vote. One candidate received 31 club nominations to their opponent’s nine.

We received endorsements from organisations and individuals across the factional spectrum, including the backing of Open Labour and Momentum. Our support base was broad, with many who thought of themselves as being on the right of our party willing to support us to end the undemocratic, factionally narrow practices of Labour Students. But even that was not enough. With thousands of members disenfranchised, in an election that has had its integrity called into question by members from across the party, none of our candidates for those seven positions won. We have since asked Labour Students to publish the turnout and results – and they have refused.

Time and time again, year after year, Labour Students disenfranchises student members of the Labour Party and proves continually that its claim to represent them is a joke. With only 250 members out of 20,000, and already half of the previously eligible clubs from this year’s elections having now disaffiliated, that claim is now dead.

For the reasons outlined above, we’re now asking the other half of eligible clubs to follow suit and disaffiliate. Labour Students does not represent Labour students. We all need to be part of a proper, democratic organisation that will represent students in the Labour Party. This should be in association with our official youth wing, Young Labour, who are electing (by OMOV) three new student reps to their national committee next summer.

In the meantime, we invite all student members and Labour clubs – including those who were excluded from the elections – to join or affiliate to Labour Students Left and be part of a temporary network outside of Labour Students. We have built a network that shares knowledge and ideas, co-hosts events with clubs across the country and ultimately offers a better voice for thousands of Labour students. Clubs can sign up using our simple affiliation form here and individual members can join here.

Labour Students Left is not the end goal. We’re a group of activists that came together only last year – although we already have over 100 members from universities across the country – but we’re determined to lead the way in developing proper democratic representation for student Labour members. Over the next 12 months, we’ll be exploring the options available, speaking to affiliated organisations and the national executive committee (NEC) about where we can go from here. Leaving Labour Students gives us the opportunity to do that.

We make no secret of our politics – our name makes that clear. To those who don’t traditionally consider themselves of the left, we have a very simple message: this isn’t a hostile takeover. We’re going to deliver power back to student members. During the elections, our slogan was ‘for a democratic, socialist Labour Students’. We don’t intend to drop the socialism. But Labour Students doesn’t represent you any more than it represents us, and when we deliver the democratic representation we all deserve, student members will be able to elect whichever candidate they want to win in elections that are fair and clean.

Labour Students is no longer fit for purpose. The time has come to abandon an organisation that has become an embarrassment to the Labour Party – and we’re finally brave enough to admit it. 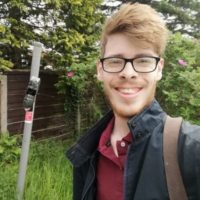 Rob Vernon is a Labour councillor in Cheshire East.

View all articles by Rob Vernon