It is fitting that Labour’s slogan for the likely 2019 general election – for the many, not the few – comes from a Percy Shelley poem about the Peterloo massacre. 2019 marks the 200th anniversary of this bloody chapter in English history, when a cavalry regiment charged into a crowd of 60,000 unarmed men, women and children who had assembled to demand, among other things, an extension of the franchise. As historians and commentators continue to argue about the wider historical significance of the event, this year’s commemoration affords an ideal opportunity for the left to emphasise England’s radical heritage.

Englishness – as argued by Dr Emily Robinson – has long been thought to be problematic for the left. Nostalgia, too, has often been seen as a wholly reactionary phenomenon or an emotional syndrome that enables right-wing politicians to exploit the notion of an idealised past for political gain.

But the past has always been important for the English left. Generations of political and social reformers – from the Levellers and the Diggers to the Chartists and modern socialists – have used the past as a resource to remake the present. They organised (and continue to organise) commemorative events to keep the memory of past events alive and to add legitimacy to their campaigns. They also adopted past reformers as their spiritual predecessors in an attempt to claim a lineage stretching back through centuries of English history.

Many of these reformers saw themselves as heirs to a distinctively English radical tradition. They insisted that they were continuing the millennia-long struggle of their forefathers (and foremothers) to restore the ancient rights of the English people that had been lost with the imposition of the ‘Norman Yoke’ in 1066. Gerrard Winstanley, leader of the Civil War-era Diggers, accused the “Norman Bastard William” of “imprisoning, robbing, and killing the poor enslaved English Israelites”. The 18th-century reformer Major John Cartwright supported manhood suffrage because he thought that all men “hath by birthright a property in the English constitution”. James Watson, arrested for high treason after the Spa Fields riots in 1816, believed that kings and lords had deluded the English people “ever since the Norman Conquest”. His contemporary Thomas Spence blamed “William the Norman” and “his proud band” for “[dividing] our land, Nought leaving but slav’ry & shame”. Even Edward Carpenter, a late 19th-century socialist poet, looked forward to the day when the English people had risen and redeemed the country “from the curse which rests upon her”.

Peterloo is best understood within a broader context of English radicalism. After all, an important aspect of the campaign for parliamentary reform was the influence of nonconformist Christian groups that flourished in the newly industrialised areas of England. With their emphasis on lay preaching, organisation and bible study classes, these groups provided the skills and experience required for early trade unionists and for working-class participation in politics.

The central message of the Peterloo reformers emphasised the injustice of lost historical rights that they wanted to regain, rather a new age of universal democratic ideals. The grievance was that these rights were an Englishman’s birthright, stolen by a corrupt landed aristocracy and an unfair feudal system. In this sense, the mounted yeomanry striking out with their sabres on that fateful day in 1819 bore a striking resemblance to the Norman knights who trampled on the fabled lost liberties of Anglo-Saxon England. The Norman Yoke myth was powerful propaganda for the reformers. ‘The reformers song for liberty’, published in the Manchester Observer in 1819 and reprised in Alison Pearson’s 2018 book Ballads and Songs of Waterloo, spoke of:

“Our ancient rights we ask, and ask no more,
Our birthrights which the tyrants now withhold.”

Guided by the efforts and sacrifices of these pioneering English reformers, the English Labour Network – on whose steering committee we each sit – is now pushing forward the idea that Labour activists can play a crucial role in strengthening a progressive, inclusive English identity as a way of marginalising far-right groups who promote a xenophobic notion of Englishness. Like the reformers of old, we believe that our cause has much to gain and nothing to lose from an ‘oppositional’ form of English patriotism. It is this belief that inspired the creation of the English Radical History Twitter account, the Radical English Tradition Facebook page, and the English Labour Network’s campaigns for an English Labour Manifesto and for St George’s Day celebrations within Labour. We urge Labour activists to join us so that we can “make this England” – in the words of the Chartist poet Thomas Cooper – “worthy of our fathers’ [and mothers’] memories”. 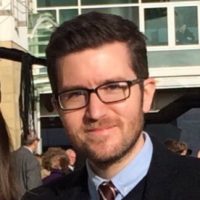 Matthew Kidd is a member of the English Labour Network steering committee. He works on the University of Oxford-led ‘Lest We Forget’ digital archive project and his first book, 'The renewal of radicalism: politics, identity and ideology in England, 1867-1924', is due to be published in 2020 by Manchester University Press.

View all articles by Matthew Kidd

George Waterhouse is a member of the English Labour Network steering committee. He is a train driver in Salford, RMT activist and runs the Radical English Tradition Facebook page.

View all articles by George Waterhouse