We know that in London rough sleeping has hit a record high, with an 18% rise on last year. Although most visible in the capital, homelessness is an issue pervading across the country: since 2010, rough sleeping more than doubled in England. The decimation of social housing over recent decades and the erosion of the welfare state have generated a worrying rise in homelessness. To reverse this, and ultimately end homelessness, the root causes must be tackled: the availability and affordability of housing.

It might seem obvious but securing a stable home gives people the best chance of moving on from homelessness or preventing it altogether. Providing housing to everyone shouldn’t be seen as “a big miracle”, which seems to work in Finland as the only EU country where homelessness is falling, but as our only chance of solving this problem for good.

Ending homelessness requires housing that offers security, decent living conditions and affordable rents to people on low incomes. To achieve this over the long term, there needs to be a considerable expansion in the supply of social housing. But the government is woefully behind, having built under 7,000 new homes provided at social rent in England in 2017/18 when around 90,000 homes are required each year for the next 15 years just to tackle the backlog of housing need.

Where social housing is not available, renting privately is the only housing option available to people moving on from homelessness. Increasingly, those on low incomes had no choice but to live in privately rented tenancies, which led to the Local Housing Allowance being introduced. This helped people meet the cost of rent, and around 1.6 million currently rely on this support.

But repeated cuts over years and an overall freeze on benefits in 2016, coupled with rising rents, means that there are often large shortfalls between the cost of rents and Local Housing Allowance rates. Too often, this means people are faced with impossible choices: feed their family and pay bills, or keep the roof over their head. It can also mean that people who unfortunately do become homeless are often left with little to no choice but to move into substandard accommodation, or, worse – they are unable to access the housing market at all.

As the end of a private tenancy remains one of the most common reasons people become homeless, sustained under-investment in Local Housing Allowance significantly increases the risk of homelessness for households struggling to make ends meet. On the other hand, the widening gap between rents and Local Housing Allowance rates threatens renters with potential eviction as they struggle to pay their rent, and also limits what people can afford when they are looking for accommodation once evicted. This results in increased homelessness, leaving people stuck in expensive temporary accommodation, or sadly, living on the streets. Councils report that is it increasingly difficult to support homeless people into homes in the private rented sector, which led to increased use of temporary accommodation – costing councils nearly £1bn a year.

Until social housing can meet demand, people on low incomes must be able to find secure and stable housing in the private rented sector. Social security plays a vital part averting a further rise in homelessness, if invested in properly. Therefore, increasing the supply of social housing must go hand in hand with ensuring people have access to a properly resourced safety net.

Restoring Local Housing Allowance rates back to the 30th percentile of the market is urgently needed to redress homelessness with immediate impact and provide a lifeline to people on a low income. Over the past decade, the number of families living in privately rented homes has increased by more than 75%, with almost half children in those homes living in poverty. We cannot afford to wait any longer.

Labour have made some bold pledges on what we would do when we win a general election. Defining ‘affordable housing’ as linked to local income and scrapping the Conservatives’ so-called ‘affordable rent’ homes priced at up to 80% of market rates. We will also stop the selloff of 50,000 social rented homes a year by suspending the right to buy, ending all conversions to ‘affordable rent’ and scrapping government plans to force councils to sell the best of their homes. And we will back councils and housing associations with new funding, powers and flexibilities to build at scale.

Successive Conservative governments have failed on housing and failed to end homelessness. There is no wonder that people have no confidence in their policies. We must act on housebuilding, and in the meantime, address the problems with Local Housing Allowance before even more families are shown the door and thrown out onto the streets. 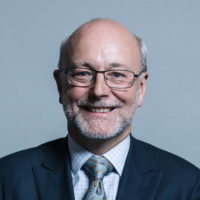 Alex Cunningham is MP for Stockton North, shadow housing minister and co-chair of the all-party parliamentary group on carbon capture and storage (CCS).

View all articles by Alex Cunningham