‘Democracy is the most revolutionary thing in the world’ – Tony Benn

The capitalist world order is in crisis. The politicians we were told to trust with our planet and its people have engineered a situation of wage stagnation, spiralling debt, and a growing sense of powerlessness – a widening gap between the people and those who govern them. Throughout all of this, the imperative for constant growth has undermined the very ecosystem in which we exist.

The European Union is fundamentally an organ of this world order. Within its boundaries, irreconcilable conflicts between the nations who have organised the EU along the lines of their own economic and political interests have pushed the Euro towards collapse as internal crises are shifted onto their own periphery nations – often the ones hit hardest by the 2008 crash. As these internal crises weigh upon the people subject to them, the policy of Fortress Europe enforces inhumanity on the refugees on the Union’s own Mediterranean border.

Here in the UK, successive neoliberal governments have pursued this economic war on the working class in tandem with the EU: they have gutted our industries, housing and public services, and slashed rights for workers, migrants and the unemployed. These governments decided that prolonged suffering by working-class communities was a sacrifice worth making for the preservation of their system. As the government led by Margaret Thatcher speculated on the prospect of a “managed decline” for working-class communities across the country, ordinary people were left to pick up the pieces.

To the astonishment of the ruling class, the working class has demonstrated a desire for change, which is reflected both by the Corbyn movement and the vote to leave the EU in 2016. As socialists, it is our job to lead the way for a truly transformative programme, overcoming neoliberalism and working towards a radical, democratic, environmentalist and socialist agenda.

The potential is there in Labour’s left-wing programme – the fact that we are besieged by the representatives of the ruling class on a daily basis is evidence of this. Our programme has the potential to unite the working class in the fight for a truly democratic economy, and to combat the racist nationalism of Nigel Farage and Boris Johnson by preventing them from cynically appealing to a disaffected working class with their disaster capitalist agenda.

In the pursuit of these aims, we must refuse to align ourselves with a so-called “progressive alliance” alongside the cheerleaders of austerity, or to abandon our transformative potential through a “government of national unity”. Instead, we must unshakeably lead on leaving the EU and building a mass movement for a radical alternative.

The success of our programme and our movement depends on us not abandoning the working class, and on holding true to our promise to deliver a democratic, worker-led economy when in government. This requires a break from the economic and constitutional infrastructure of the EU – a break from the ‘four freedoms’, a break from the preservation of economic competition over economic justice, and a break from the undemocratic authorities that impose these restrictions on member states.

Leave – Fight – Transform was formed to champion this cause. We are a grassroots network of socialists, trade unionists and community activists committed to democracy, internationalism and socialism.

Sarah Cundy is writing on behalf of LeFT. 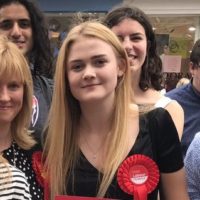 Sarah Cundy is a spokesperson for Leave Fight Transform, a member of Manchester Momentum's committee and a youth representative on Labour's South East Regional Board.

View all articles by Sarah Cundy