Why should a compulsory school uniform cost hundreds of pounds, with no support for struggling parents? It’s a question that I heard time and again from parents on the doorstep while I was campaigning as the Labour candidate in the Peterborough by-election, and since I’ve been elected as their MP.

That’s why I made it the subject of my first parliamentary questions and early day motion as an MP. Judging by the support that the motion has received, not just from other Labour MPs but from members of other parties such as the Liberal Democrats and the DUP, this is something that parents are raising with their own representatives across the country.

The Conservative government once agreed with them. Back in 2015, the then Chancellor George Osborne announced with much fanfare his plan to issue statutory guidance for schools on uniforms, which would see binding rules for schools ensure fairer costs. As they identified, the cost of uniforms can be unnecessarily pushed up by practices like sourcing a unique uniform from a single specialist provider, which will often charge more. But four years later, despite repeated urging by Angela Rayner and other Labour MPs, there has been no sign of the promised action.

If anything, the problem is now even worse. After four further years of Tory austerity, more parents are feeling the pinch. A recent survey from Buttle UK found that a huge majority of frontline support workers are seeing more families in extreme poverty. There is increasing financial pressure on many parents who simply want the best possible start in life for their children but are struggling to make ends meet.

At the same time, we are seeing more cases, including in my constituency, where parents suddenly face a three-figure annual bill to buy uniforms from a single specialist shop. In one recent case, adding a logo to the trousers increased the cost by 75%.

Schools, too, are suffering after years of Tory cuts to their own budgets. This has left them desperate to raise funds however they can, and lacking in resources to help parents in the way they would like.

Meanwhile, with local government bearing the brunt of austerity, many councils can no longer provide the school uniform grant, which is set out in the Education Act and once supported disadvantaged families to help deal with these costs.

Peterborough’s Conservative-led council even decided to axe the school uniform grant long before the cuts, apparently not believing that money raised through taxes should be used to help the worst off in society. Yet as government ministers admitted to me, they don’t even collate data on where grants are provided, so we have no idea how widespread the problem is, how many parents are losing out or by how much.

This combination of disastrous welfare changes, loss of school uniform grants and cuts to the education budget mean that uniform costs have become an excessive burden to parents across the country.

There are simple solutions. When I was at school, my parents would just buy a generic uniform with a sew-on logo for me. In these tough times, this should be common practice, and parents should not be forced to shell out exorbitant amounts.

If the government provided the statutory guidance that they promised and reversed the disgraceful cuts to council and school budgets, the affordability of school uniforms could be guaranteed and parents protected. The Labour government in Wales, for example, has recently put its own guidance on to a statutory footing, making it binding.

In response to my parliamentary questions on this, ministers suggested schools could offer cut-price second-hand uniforms, and claimed they still planned to impose statutory guidance “when a suitable legislative opportunity arises”. Yet we are now nearly four full years on from their original pledge to act.

While I welcome schools taking action, it seems to me that the government is shirking responsibility instead of keeping their own promise to act. They have told me that they’re waiting for parliamentary time but they have had more than enough time over the last four years. Simply, they have failed. Parents on the breadline have been left waiting long enough – now it’s time for action, not words. 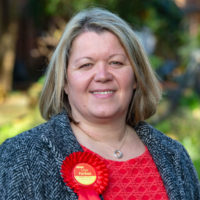 Lisa Forbes is MP for Peterborough.

View all articles by Lisa Forbes