More than a decade after the financial crisis, and more than nine years of the brutalising Tory austerity agenda, communities across our country are still waiting for the so-called ‘end of austerity’. Despite Brexit being pushed by commentators and politicians on the right as the only antidote for Britain’s ‘left behind’, Boris Johnson’s promise of more tax cuts for the rich and his disastrous no-deal Brexit folly will simply result in all of us being left behind.

However, the government-driven chaos around us hides a quiet revolution that has begun in local authorities across the country. It’s the community wealth building revolution, started in Preston and now spreading across the county, from Newcastle to Newham. It’s what Andrew Gwynne, Shadow Secretary of State for Communities and Local Government, describes as “a renaissance of local government in communities right across Britain”. This approach has rekindled optimism and confidence in local government’s transformative potential, and for the first time in many years we’re not on the back foot.

When I was elected mayor in May 2018, I pledged to make Newham a beacon of community wealth building. I wasn’t joking. Now more than ever, Labour in local government needs to be bold and loud about what we’re doing to tackle the stark inequalities the country suffers from. The current economic model is broken. Nationwide, real terms pay is less than it was in April 2008, and people in Newham are feeling it more than most. Meanwhile, precarious work has proliferated, with our residents disproportionately affected. Newham has the highest percentage of working residents in low-paid work in London. Astonishingly, up to 36,000 people in our borough were paid below the minimum wage in 2018.

The people of Newham are also on the front line of the housing crisis. We have over 27,000 residents on our council house waiting list, and after housing costs, a shocking 48% of our residents live in poverty. All the while central government has hamstrung our ability as a council to tackle these problems. Government funding of councils has fallen 50% in real terms since 2010.

Too many people in Newham – as elsewhere – are stuck in jobs that don’t pay enough to meet the cost of living, powerless to stop abuses such as wage and time theft. Too many of our children are growing up breathing in toxic air. Too many families are living in substandard accommodation. Newham Council is ready to tackle these issues head on, and we are already taking action.

Newham has a proud radical history in the fight for social progress. We are the borough of titans of the early labour movement such as Ellen Wilkinson, Eleanor Marx and Susan Lawrence, who fought passionately to improve the lives of Newham’s residents. Under my leadership, we are determined to continue this tradition as a radical, campaigning council. Recently we took on the banks and saved our residents some £143m in interest payments when we terminated toxic lobo loans with NatWest Bank. We’ve led the way in protesting the Defence and Security Equipment International (DSEI) arms fair, hosting our first ever Peace Exhibition – and we’ve kick-started a massive programme of building more homes at social rent levels, homes that our people can afford. The centrepiece of this new municipal socialism is community wealth building, embracing the principals of the green economy to respond to the climate emergency we all face.

Our new community wealth building approach is about ensuring our residents have the best possible opportunities, encouraging the creation of high skilled jobs and helping support our residents into them. We will aggressively and unapologetically drive up employment standards for our residents. We are now on course to become an accredited living wage employer, having already put aside £3m for our hardworking care workers.

We have been working closely with our local trade unions on sector-specific initiatives to improve the quality of employment in the borough. In this spirit we have signed up to Unite’s Construction Charter, as well as the Unison Ethical Care Charter. Finally, the council has been conducting research with workers in insecure employment, trade unions and third sector organisations so that we can tackle employment rights abuse in the borough.

Our community wealth building approach goes far beyond the labour market. Our strategy, which will be launched later this year, sets out the bold vision with which we will tackle the injustices our residents face. Following the lead of Preston, we will use our purchasing power and influence to keep wealth in our local economy. We will use all the tools available to us to help deliver this ambition. This is about harnessing the resources, talent and potential that already exists in our borough.

Our efforts shape our ambitious housebuilding programme and our response to the climate emergency. We aren’t just creating an economy that works for our residents, but a community where people live in homes at social rent levels that are fit for purpose and a borough that will become a hub for low-carbon innovation and industry.

All of this is just the beginning. We have already started scoping opportunities for cooperatives and community land trust housing, and we are tackling the pay gap in a borough which is the most diverse. We’re also financing a different type of economy as part of our plans to embed Newham’s local Green New Deal.

The opportunities and challenges faced by Newham requires an approach that genuinely transforms lives. That approach is community wealth building and now is the time to unleash its transformative potential in towns and cities across the country. This is all part of Labour’s agenda to reverse the devastating impact of Tory-led austerity that has wreaked havoc on so many communities and lives. 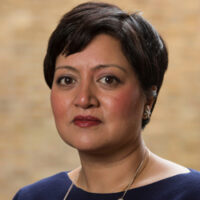 Rokhsana Fiaz is mayor of Newham.

View all articles by Rokhsana Fiaz