Last week, the rumours were proven true. Theresa May – who had previously said David Cameron’s Lords appointments made her “wretch” – handed some of her closest allies seats in our parliament for life. The 19 appointments included her former chief and deputy chiefs of staff. (Clearly based on merit, given how well May did with their help.) And all the nominations, which include several Labour appointments in the mix, will all be able to claim expenses and vote on our laws for decades to come.

It is testament to Labour’s principles that – despite the short-term benefit of netting a few seats – the party recognises the need to overhaul Britain’s unelected, super-sized second chamber. In 2018, Pauline Bryan was nominated by Jeremy Corbyn to the Lords, with a brief to draw up new constitutional policy for the party. In March this year, we saw the first fruits of that work: the ‘Pauline Bryan Paper’, published by Politics for the Many and the Red Paper Collective.

That paper noted that polling conducted for the Electoral Reform Society showed a clear majority support reform of the House of Lords – across parties. It is one of the few issues that unites Brexit Party supporters and Greens, Liberals and Kippers: the private members’ club that is the Lords is not fit for purpose, and real reform is long overdue.

Jeremy Corbyn has stated in the past: “We have a House of Lords which is dominated by a small number of people from London and the South East. I would want to see an elected second chamber that it is representative of all regions and nations of the United Kingdom. I think that’s very important.”

Until recently, however, Labour’s policy remained the one expressed its 2017 manifesto: “Our fundamental belief is that the Second Chamber should be democratically elected. In the interim period, we will seek to end the hereditary principle and reduce the size of the current House of Lords.” While generally positive, it failed to give voters confidence that Labour was committed to a democracy for the many – not just in the economy, but in the institutions that affect all of our lives every day.

At Politics for the Many, we have been campaigning hard for that reform call to be unequivocal in the next election: to scrap and replace the second chamber with one that truly represents the nations and regions of the UK – and represents people’s votes fairly too. A proportionally-elected Senate that can speak up for the whole country.

Those calls have been growing in recent months. Just last month, The Mirror reported that hereditary peers have trousered £4m of taxpayer cash in less than two years. Those 92 aristocrats are still allowed to make our laws thanks to their family name. This is a stain across the House: tainting the reputation of politics and parliament, as a bastion of privilege and undeserved power.

Our ‘This is What Democracy Looks Like’ conference in August, marking 200 years since the Peterloo Massacre, brought together campaigners from across the movement to call for a shift. Speakers from Jon Trickett MP to Wales TUC’s Shavanah Taj, from James Meadway to Dawn Foster, argued that Labour must build a vision for a politics for the many. Lords reform would send a strong message: a principled and pragmatic move to ensure the majority of our parliament was at last chosen by the public.

That message is now being heard. In a landmark speech last Friday, Scottish Labour leader Richard Leonard made clear that a Corbyn-led Labour government would seek to abolish and replace the House of Lords. The proposals – launched at an Electoral Reform Society fringe meeting at Scottish Labour conference – made the call for “total reform” of the House of Lords and a “new relationship” between Scotland and Westminster.

In the speech, the Scottish Labour leader said: “The next Labour government’s success will depend critically on its determination to rebalance power in our constitution and in our institutions in order to deepen and extend democracy… That’s why we are proposing the abolition of the House of Lords and its replacement with an elected second chamber: a Senate of the Nations and Regions that could begin the process of reshaping our political system.”

This is a significant development – and an incredibly welcome one ahead of Labour conference. We urge all delegates to get behind the ‘Politics for the Many’ motion (put forward by Almond Valley CLP) backing a democratic second chamber at conference, and to prioritise it in the ballot.

This is the only plausible policy on a Lords that a genuinely progressive Labour government can put forward. Socialism is nothing without democracy. The gains we seek in the economic sphere will be swiftly undone by the next reactionary Prime Minister if the Lords remains a plaything of the ruling party, able to be packed with cronies who toe the line.

As argued by Sabrina Huck on LabourList last week, we can’t simply oppose a constitutional crisis: we need to have a bold and positive response for real democracy. Because if we are truly radical, we’ll renew our politics ‘from the root’ itself. Labour conference might have a chance to do just that. 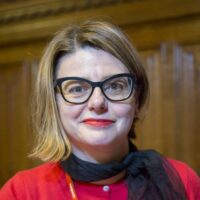 Lynn Henderson is chair of Politics for the Many, the trade union campaign for political reform, and PCS national officer.

View all articles by Lynn Henderson