“We did it! What did we do?” That was my immediate, gut-punch response to witnessing the Labour’s Socialist Green New Deal motion pass at the Labour Party conference in Brighton last month. It was a motion that I and over 100 other delegates had spent two sleepless nights trying to thrash out during the longest ever compositing meeting in Labour Party history. Now that the dust has settled, I’m still trying to process the full enormity of what has happened – and the lessons that I’ve learned along the way.

In essence, Labour’s Socialist Green New Deal represents a daring move to tie the future of the British labour movement to an economic transformation whose ambitions are on a parr with the scale of the climate emergency itself. It’s not just that Labour has been mandated to implement one of the most radical climate policies in the world; it’s that it has achieved this with substantial union backing. Net zero emissions by 2030 is an incredibly ambitious target – perhaps even an impossibly ambitious one, and it remains to be seen how the frontbench will choose to interpret it.

What makes the target credible, however, is that it was passed on the party’s conference floor with the backing of CLP (Constituency Labour Party) delegates and also a majority of unions. Most significantly of all, it received the backing of Unite, the mega-union representing workers in sectors including energy and aviation. That’s a complete game-changer on the doorstep. To people justifiably worried that a rapid transition threatens their jobs, we can now say: “Yes, you’re right. The climate crisis means that jobs are going to have to change. That’s why your union is working with us to make sure that you get a safe, unionised job in the new economy. This is a worker-led transition: your union trusts us to put your interests at the heart of the process.” There isn’t a party in the world that can say that right now and, as Alexandria Ocasio Cortez was quick to tweet, “this is a huge deal”.

The trust that the unions have placed in Rebecca Long-Bailey’s economic and ecological transition is a massive political asset, but it is an awesome responsibility too. As a delegate involved in the mammoth compositing negotiations that produced Labour’s Socialist Green New Deal motion, I am only too aware of the fragility of our alliance. 128 individual CLPs and various unions had submitted a Green New Deal motion to conference, and the task of the compositing meeting was to arrive at a text to which all parties could agree. In many ways, the room was a microcosm of society: split along both generational and class lines. Mostly older, working class union members formed the bulk of the first generation. The second generation was amply represented by millennial CLP delegates, with a few members of the new, insurgent generation of school climate strikers added to the mix.

As soon as the negotiations began, those dividing lines were painfully clear. At around midnight, the meeting broke up in acrimony and anguish as it became apparent that the GMB union, which represents workers in sectors including distribution and utilities, would not accept the inclusion of any concrete target for reaching zero emissions. The meeting had to be reconvened the next day, and many people felt pessimistic about its prospects. Within minutes of it re-starting, however, it became apparent that a miraculous breakthrough was in sight.

This sea-change was due in part to the tactical decision to proceed without the GMB union, who left to thrash out their own motion with the support of SERA and a small number of delegates for whom the 2030 target date had also been a sticking point. Their composite, which was ambitious and radical in everything other than the target date, was also later passed by conference. Meanwhile, in the main compositing room, it became evident that a rapid learning process had been taking place – a process from which I had as much to learn as anyone.

Like many of my millennial counterparts, I joined the Labour Party at the time of Jeremy Corbyn’s campaign to become leader. Born under Thatcher, our generation came of age under Blair and so, to most of us, the idea of organising with the Labour Party simply did not occur. Instead, we went into movement politics – Climate Camp, UK Uncut, Occupy, etc. Our experiences were shaped by the spaces we created: spaces that were wonderful in many ways, because when they succeeded they were gender-inclusive, consensus-based, utopian. They were, however, often far removed from the worlds of workplace organising, class politics and the slow rumbling workings of the Labour Party machine.

The economy shaped us too: the workplace that we entered was precarious and digital, flexibility was the watchword, our rents were rocketing and only a very few of us managed to stay in one place long enough to get organised as workers, let alone as renters. Increasingly, we are also a cohort shaped by crisis, by a visceral understanding that we are the last generation with the power to act, that climate change is here and now, and also in the future – a future into which we have to decide whether or not to bring our children. In this, we resemble the insurgent generation in the room, although the young climate strikers’ understanding of the urgency of the stakes is stronger, louder and less conciliatory than those of us who grew up on a diet of Britpop and Friends.

In the context of the Green New Deal compositing negotiations, the generational and class gulf separating various CLP and union actors in the room was, at first, a major stumbling block. At one point, a particularly agitated young climate activist even went so far as to (literally) stamp her foot and declare that we shouldn’t care about jobs when the planet is dying. There were intakes of breath: a classist dynamic that had hitherto remained unarticulated was suddenly, palpably present – raw, ugly and unresolved. An additional challenge was that many of the younger CLP delegates seemed to be under the impression that “the unions” were a homogenous block when, in reality, several of the smaller unions had been on board from the start. As time wore on, their representatives began to play a greater role in the talks, part of a subtle but noticeable shift in the voices being heard in the room.

As trust was built and understanding of the different interests at play grew, people spoke who had previously been silent. Older, working class CLP delegates patiently explained the thinking of their unions. The insertion of a pledge to “repeal all anti-union laws, facilitating worker-led activism over social and political issues, including climate change” was met by whoops and cheers across the board, and the decision to insert the word “socialist” into the motion’s title was also unanimously and enthusiastically embraced. Three rows from the front, firm and restrained, Matt Wrack of the Fire Brigades Union spoke with the moral authority of someone who is as familiar with picket lines as he is with fighting wildfires.

When the hard-won text of the composite was finally put before conference, the choreography was both seamless and profound. As general secretary of the FBU, Wrack was an obvious and popular choice to move the motion. However, the selection of Angela Brown from Heywood and Middleton CLP to second it was, if anything, even more significant. A young, working-class woman in the green “Labour for a Green New Deal T-Shirt” that conference goers had come to associate with millennial climate activists, she stood in front of the sovereign body of the British labour movement and was able to speak both about the inspiration she’d drawn from the climate strikes and Extinction Rebellion, and about her own attempts to unionise her workplace in Rochdale: “We was at the heart of the first industrial revolution: now we want to be at the heart of the green industrial revolution.”

Voices like Brown’s are key, and we as a society need to make more space for them, both within our political processes, and within our media coverage. As a movement, we also need to find ways to actively support them, because they are the bridge – the people who are going to become emissaries of change within their own communities, the people who share both a generational understanding of crisis, and a class-based understanding of the historical struggles and alliances that might just point us towards something better.

One important next step is going to be the creation of spaces in which people can begin work out what the Green New Deal could and should look like in their specific communities. For example, Sheffield Labour for a Green New Deal has teamed up with Foodhall Sheffield and National Food Service to bring people together over a community cooked meal. This is a fantastic way of bringing people into the discussion, whilst also linking it up to the local push for Universal Basic Services.

Another idea is to consciously and explicitly focus political education on inter-generational exchange, rooting younger activists in a sense of historical class struggle, whilst bringing older, more party-focussed organisers into extra-parliamentary campaigns. In my CLP we’ve already made a start on this: it was collaboration between rulebook-savy veterans of the old left and younger GND organisers, for example, that enabled us to identify an opening in which to challenge fossil fuel sponsorship at conference, contributing to the cancelation of a BP-sponsored panel event on climate change.

As Angela Brown reminded conference: “This is going to take all of us – every worker, every school striker, every part of our labour movement.” If we try to paper over our differences, they can weaken us. Once we acknowledge them, they can be turned into an asset. In the Green New Deal compositing room, I witnessed first-hand how a generational divide went from being part of the problem to being part of the solution. 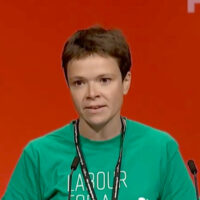 Kate Laycock is a broadcast journalist based in Germany. She is a member of Labour International CLP and organises with Labour for a Green New Deal.

View all articles by Kate Laycock