Labour’s manifesto policies and other general election campaign commitments have been picked apart by other political parties and media commentators. But how popular are these radical proposals with the general public? 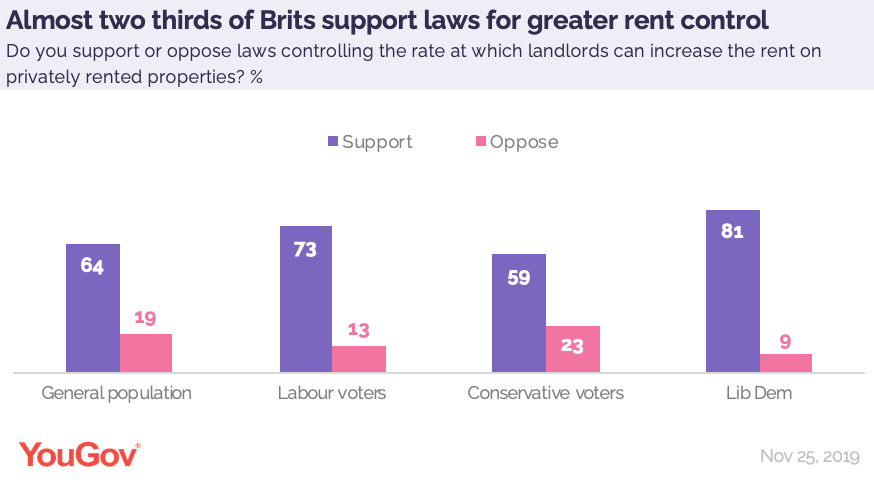 64% of the British public – including 73% of Labour voters and 59% of Tory voters – back Labour’s new plan to bring in rent controls designed to make private rented sector properties more affordable and secure. 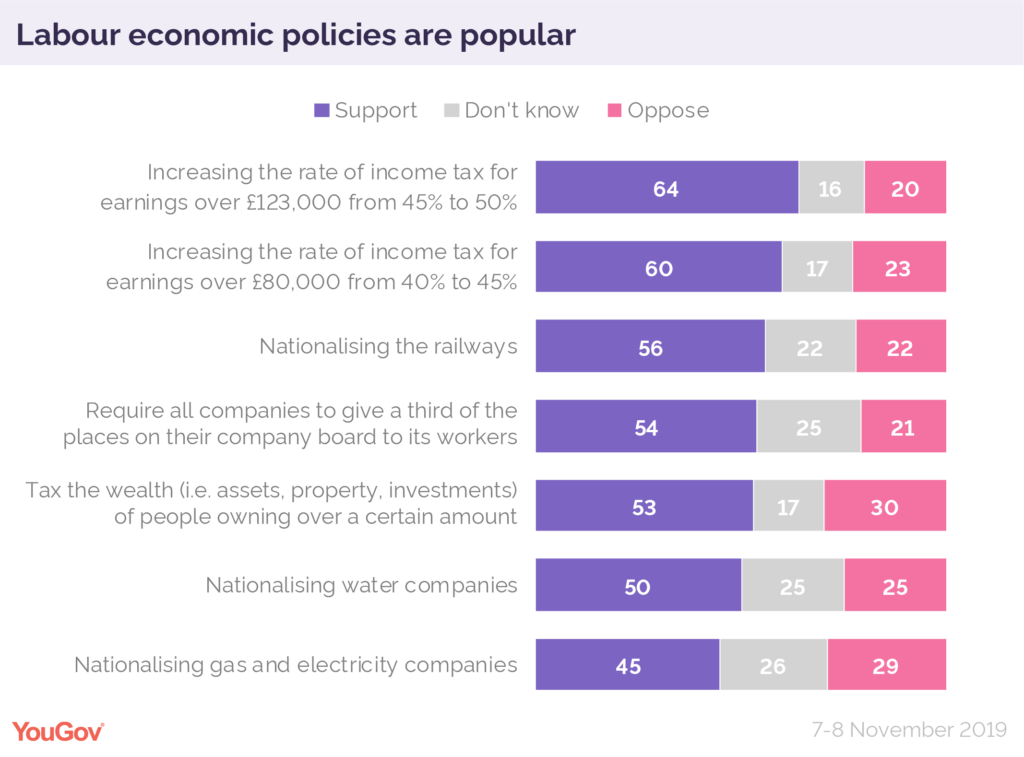 Taxing wealth was also a pretty popular policy. When asked whether the government should “tax the wealth (i.e. assets, property, investment) of people earning over a certain amount”, 53% were supportive of the policy, while only 30% of people actively expressed their opposition.

Labour’s policy pledge for worker representation on company boards also fared well in the poll, with 54% of people in favour of the policy compared to 21% against.

YouGov did a specific poll when Labour announced policy to provide free and fast broadband for everyone. 62% expressed their support for the idea, compared to 22% against the policy. This fell to 32% for and 31% against when asked specifically about nationalising BT’s broadband structure, but the party’s headline proposal on broadband was largely welcomed.

Labour’s policies are popular. The party can feel confident that its offer to the public on December 12th is a strong one. But this begs the question, if people support the policies, why are Labour not doing so well in the polls in terms of outright voting intention?

Labour has been trailing the Conservatives for weeks in all polls by the major polling companies; last week, Ipsos Mori placed Labour a full 16 points behind the Tories while more favourable results had Labour behind by ten points.

Voting intentions will not be wholly, or even predominantly, based on policies. How they are sold, who is selling them and whether they are deemed deliverable also matter. YouGov found that 57% of people think the UK will go into recession within a couple of years if Labour win the election. This suggests that Labour still needs to defend against the enduring Tory attack line on its supposed mismanagement of the economy.

It is worth keeping in mind that polling in the UK has been patchy recently. While polls have been largely accurate over the past 70 years as a whole – the margin of error between polls and votes achieved is around 2% in all general elections since 1945 – recent elections have seen the major pollsters offer inaccurate predictions.

In 2015, none of the 92 polls accurately predicted the 7% lead that the Conservatives achieved in the end. Most predicted a hung parliament. In 2016, most polls got the 2016 EU referendum badly wrong with fewer than a third predicting a Leave vote, and in 2017 almost all of the polls underestimated Labour’s vote share.

Some have suggested that the problem is that polls don’t allow for political upsets. Pollsters manage their selection of who to interview and how to weight the results by relying on past outcomes. This arguably means polls aren’t equipped to capture unexpected changes in public opinion that might buck the trend.

We have to question what the polls are actually measuring. After the first live TV debate, YouGov asked people who won with 51% responding in favour of Boris Johnson over Jeremy Corbyn. But when asked if each candidate performed well, 67% of these people answered positively for Corbyn compared with only 59% for Johnson. If more people felt Corbyn performed best, why did the majority tell us Johnson won? Phrasing is crucial.

There’s also the tricky first-past-the-post and multi-party system across 650 seats. A large surge in support from members of the public doesn’t necessarily translate into more seats if they’re concentrated in the wrong seats. Equally, while parties might poll well nationally, an MP might lose their seat due to specific local issues and dynamics that are difficult to reflect in polling.

It’s clear that there is a lot of support for the policies Labour has set out over the past couple of years and in the 2019 manifesto. To what extent people prioritise personalities over policies, or Brexit as a single issue above the rest, will determine the extent of Labour’s success on December 12th.