When the general election was called, we saw a swathe of young people stand for selection as parliamentary candidates. It is clear that we are moving in the right direction, towards breaking the chain of old, white and privileged cis men being offered safe seats to represent often diverse constituencies. That said, the Labour Party selection process and subsequent treatment of prospective parliamentary candidates show that we are far from achieving the representation our party desperately needs.

We must acknowledge that PPCs who are women, often Muslim and/or from BAME* backgrounds, have been subject to intense hyper-scrutinisation online. It is to be expected that a candidate’s historical online presence will be trawled through. Candidates are vetted on their social media prior to selection, and the effectiveness of this vetting process thus far has and should be scrutinised, as all processes should be.

The problem is that once candidates are selected, they are subjected to yet another round of social media checks by fellow party members and journalists. This second round has had a disproportionate impact on candidates from BAME backgrounds and who are Muslim, with the scrutiny often focusing on their approach to racism or issues of foreign policy. We should question why screenshots from years ago are saved and only released once such candidates are selected for positions in our party.

If we are to be truly committed to becoming a party that represents the many, we should educate people when we see them expressing problematic opinions – not several years later, once their views have developed. (Of course, candidates who subsequently fail to uphold the International Holocaust Remembrance Alliance definition of antisemitism or the all-party parliamentary group definition of Islamophobia will be rightly subject to disciplinary procedures.)

Before reaching the stage where candidates are unfairly scrutinised online, we should allow for space in which candidates and young activists are allowed to learn. We need to work towards creating a political environment where BAME activists are not driven out of candidacy because they were not warranted the forgiveness often awarded to their white counterparts for problematic social media takes.

Unfortunate choices in words have resulted in calls for the deselection of several Muslim women PPCs. In the recent case of Peymana Assad, the candidate for Ruislip, Northwood and Pinner, a misunderstanding over the commonly used slang terminology in London “gassed” resulted in numerous tweets aimed at Assad labelling her as antisemitic. We should be more mindful of the sources raising attention to such tweets – in this particular example, the tweets were brought to our attention by Guido Fawkes.

A further example is found in the misunderstanding of Islamic terminology used by Shaista Aziz, who ran for selection in Nottingham East. Her use of ‘Jihad’ was taken out of context, which Aziz noted in her apology. It became increasingly evident that she was unfairly profiled as a Muslim woman. Tweets calling for the deselection of candidates often rely on dog-whistle racism, and they are frequently coupled with overt and covert Islamophobic tropes. This must be recognised.

The party is moving forward in terms of encouraging more BAME candidates to stand for selection. Yet the hyper-scrutiny to which those candidates are subjected – and the failure to adopt a significantly more diverse pool of candidates, despite the party promoting the Bernie Grant Leadership programme to achieve just that – signals a further need to evaluate how our processes disadvantage certain PPCs. We should create better systems to educate each other, instead of cancelling those who may have made mistakes online in the past.

*BAME is an acronym for Black, Asian and minority ethnic. It is important to note that the experiences of Black PPCs do vastly differ from that of Asian or minority ethnic PPCs, and that this term should not be used to detract from individual experiences. 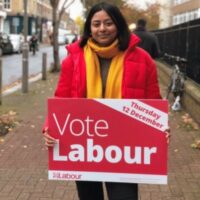 Maliha Reza is a Labour activist. She is a youth officer in North East Bedfordshire Labour and women's officer in KCL Labour.

View all articles by Maliha Reza