71% of the British public support Labour’s pledge to introduce rent controls in England with just 9% opposed to the idea, a new poll has found.

The research by Ipsos Mori, conducted ten days before the general election, showed Labour’s range of radical housing policies to be popular among adults across the country.

A majority of respondents said they backed Labour’s plan to build 150,000 council and housing association homes a year by the end of the next term.

By a margin of more than three to one – 58% to 16% – respondents rejected the idea that there isn’t much that the government could do to solve the housing crisis.

The proposal that the government should borrow money and raise taxes to fund affordable housing to buy or rent also attracted support, with 36% for and 30% against.

However, Ipsos Mori said its research showed that housing was a “second order issue” because only 23% said that it would be very important in helping them to decide who to vote for.

Giving powers to local authorities to increase council tax on second homes and empty properties, proposed by the Lib Dems, was supported by 56% of people.

The Tories’ ‘infrastructure first’ policy – requiring social infrastructure such as GPs and schools to be provided before new housing is built – was  popular with 75% of people. 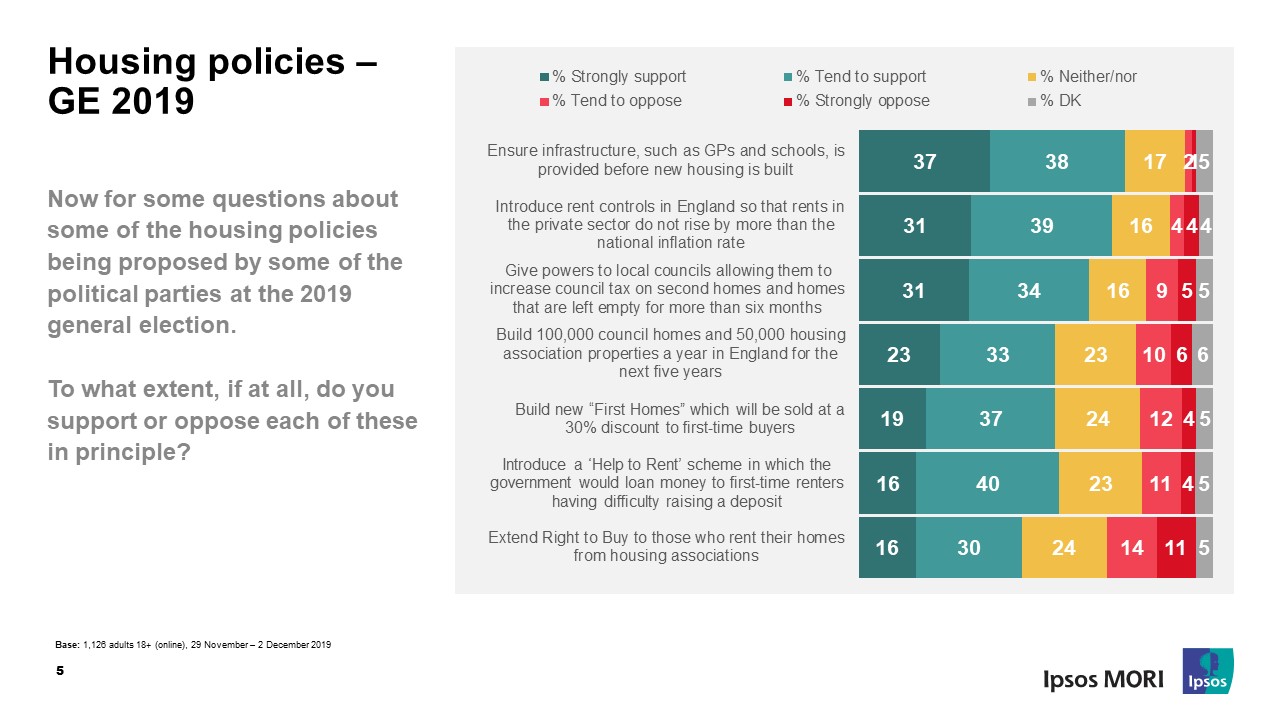 Although support for housing policies among those polled was strong, the research revealed that the majority of people weren’t confident that any of the three main parties would improve housing is elected.

53% of people asked were either “not at all” or “not very” confident in Labour, increasing to 60% and 63% for the Conservatives and the Lib Dems respectively.

The Tory manifesto pledge to extend Right to Buy to housing association properties was the least popular of all the policies polled, with 46% expressing support and 25% opposed.

The pledge would see tenants of housing associations able to purchase their homes at a significant discount – an extension of the original Tory policy introduced for council tenants in 1980.

Analysis from the local government association showed that there were more than six times as many homes sold under the scheme as those built by councils in 2017/18. Since 2012, councils have replaced one fifth of the homes sold.

A recent freedom of information request found that 40% of council homes sold in London under Right to Buy are now being rented out by private landlords.

Research from Shelter showed that a house sold through Right to Buy is five times more expensive to the taxpayer than building a new home.

Labour’s manifesto has committed a Jeremy Corbyn government to building 100,000 council homes and 50,000 housing association properties each year for the next five years.