We are all looking closely at the candidates coming forward to be the next Labour leader. A lot of the discussion is around who might be the ‘best’ socialist among them, with the best policy programme to lead the charge in 2024. Little is being said about who might have the best plan to promote and persuade communities of our politics.

But experienced Labour community and workplace organisers tend to look for solutions from the bottom up – not the top down. Re-arranging the deck chairs at the commanding heights of the party is unlikely to work on its own. It is time for the party to take advice from its roots about how we earn, and re-earn the right to be heard in the towns we lost to the Tories.

The deep splits in the Labour Party are being exposed for all to see on pretty much every news channel, while Boris Johnson maintains his charmed life of no media scrutiny. Much of the initial analysis has become shamelessly factional and tending towards backing specific personalities for the leadership. But organisers are about action more than faction. And some fundamental truths are emerging, which indicate that the way forward lies in listening to those currently shouting – to the top of the party – about grassroots change.

These truths include the fact that our disconnect with voters began decades ago and that organisationally – as well as maybe politically – we have taken the votes of some communities for granted for far too long. And paid a terrible price. Brexit became the petrol thrown onto a fire that was already burning, and will be remembered by history as the vehicle that the Tories used to take back control of our communities and our lives.

Buried underneath the X Factor-style leadership race is our longstanding strategic challenge. Are fighting elections and building a left consensus mutually exclusive or can they ever be complementary? Are we really just an electoral machine, impotent in opposition? Or can we, as many organisers like me believe, pivot to becoming a genuine social movement that actually does things in communities between elections? Community and workplace organising has the best potential to navigate the tension between the two, and can ensure we avoid falling into the trap of campaigning against ourselves where we control councils.

We have at various times bounced between the two extremes of this challenge. In the days of Tony Blair, Labour set out to win elections with as little politics as possible and focused on organisation, micromanagement and mobilising what they saw as the ‘Labour vote’. Keeping commitments paper thin and few in number, openly taking communities and potential Labour voters for granted, and preparing the ground for later triangulations with the Tories.

If Blair’s Labour was all about organisation over politics, Jeremy Corbyn’s had a tendency to become more about policy over organisation. Despite our offer, our organisation on the ground was what it always is: last minute, panicked, shallow and measured more by numbers on a tweet than electoral impact. We went into this election on the doorsteps with Corbynite policies and Blairite scripts – and the two conflicting approaches cancelled each other out.

Despite being philosophically flawed in this new and volatile voting climate, the basic campaign infrastructure, and importantly doorstep script, of 1997 is still with us in our local campaigning. Even with a radical socialist manifesto in our hands, we were still briefed to ask: “Do you normally vote?” Followed by, “do you normally vote Labour?”. Before recording the answer for posterity, which can sometimes mean ten years or more, and moving on.

We need a campaigning approach in communities that persuades and supports our policies and a leader who gets this contradiction. Done better – with challenge, persuasion and discussion – the doorstep should have been the best place for us to counter the Tory attack lines of ‘get Brexit done’. But, in the end, organisations tend to do what they are built to do.

Despite attempts to drive radical change in community organising with a bottom-up approach by many activists and Momentum, in our communities the party essentially remains a short-term mobilising force. One locked into the electoral cycle and slightly uncomfortable with politics or long-term perspectives. We still have a long way to go to finish re-organising the party where it matters most – in wards, CLP’s and regional offices.

Of course, mobilising work is an attractive shortcut. It feels good to fill a room with people for the leader and key campaigners to meet. The mass selfies before canvasses are great fun on Twitter. But the problem is that mobilising does not jump-start organising – more often it replaces it.

Mobilisation gives the impression of success but fails to build agency and power – the essential ingredients of real organising. It can even reinforce the impression in some communities that we only appear at election times and are soon gone when the balloons burst and the bunting comes down.

We need a new leader who will avoid the pitfall of trying to solve an organisational problem with a political solution, and who will bring in fundamental reorganisation of the party. They must continue to turn the party on its head, revitalise our local branches, re-write our campaign plans and our doorstep scripts. The next leader must make us a social movement – between elections – that asks for votes from communities of which it is a part. We must fill every space we can with our politics.

The next leader must make sure that we maintain an organising presence in every community which has told us that the Labour Party has neglected them. We should establish street and ward organisers in every town; organise the food banks; campaign to protect migrant workers and victims of universal credit, take on the slum landlords and rip-off bosses with our trade union and campaign allies. And in the end, we must turn up in people’s lives and ask how we can help. 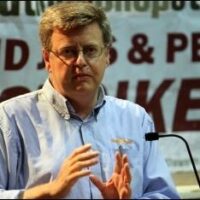 Martin Smith is a community and union organiser currently working with the University and College Union.

View all articles by Martin Smith