It was ‘Super Thursday’ for local party nominations last night – another excellent round for Keir Starmer, who went up by 23 to a whopping 85. Rebecca Long-Bailey didn’t do badly, adding 16 to her total, which is now 44. Lisa Nandy isn’t exactly steaming ahead, but she did well to get Vauxhall – it is both London and very pro-EU, which should have benefitted Starmer. He missed out by just one vote there thanks to a strong second-preference showing for Nandy.

Several results were incredibly close between Long-Bailey and Starmer: Central Devon went Starmer by two votes; left-leaning Wycombe went Long-Bailey by two votes. Others were clear wins – for Starmer in Greenwich, for example, and for Long-Bailey in Wansbeck and Coventry North West. Streatham, which you can always rely upon to bring the drama, kept up nomination observers until late with its near-midnight announcement. Now we know why: it was 127 for Starmer and 125 for Long-Bailey in the final round.

‘Do you want to win the next election or do you want to keep the Labour Party left-wing?’ This is the dividing line being presented in many of the arguments at local party nomination meetings, according to reports. It reveals the weaknesses of both frontrunners in the leadership race as the question is based on the assumptions that: a) the wider electorate could not find Long-Bailey appealing, however much she may be liked by party members; and b) Starmer would pull Labour back from its current left-wing position, driving the party into a new era of triangulation and centrism. This dichotomy, however false you believe its premise to be in either direction, makes the task ahead of each candidate clear. Long-Bailey must show that she is best-placed win back the seats Labour has lost, while Starmer must build trust on policy-making in particular.

The Shadow Brexit Secretary will try to do just that in a speech this morning, which is being delivered just twelve hours before Brexit. He will talk about the future challenges faced by the country after it leaves the EU, and how Boris Johnson should respond. Starmer gave a hint as to what he might touch on in a Guardian article last night, which saw him back awarding full voting rights – including in general elections – to EU nationals living in the UK. This would be a bold move, enfranchising three million residents. And yet some pointed out in response to this policy announcement that it would be rowing back on Labour’s 2019 manifesto, which vowed to give full voting rights to all UK residents rather than just to EU nationals. When asked about this point, his team pointed LabourList towards Starmer’s Labour for Free Movement questionnaire, in which he advocated “full voting rights… for long-term UK residents” as well as EU citizens.

Jeremy Corbyn’s spokesperson, when asked about Brexit Day earlier this week, replied: “There’ll be no tears… This is a decision that people took in 2016. The question is what the quality of that Brexit is going to be.” For many in Labour, of course, there will be tears. Much of the party has been fighting the 2016 result for years now, and that is part of the explanation for Keir Starmer’s success in this leadership election so far. Brexit did not just cut short the terms of two Tory Prime Ministers – it is also playing a large role in what looks like the end of Corbynism.

As the most contentious issue of the last few years, Brexit saw pro-EU activists wrestle with the idea of implementing a democratic decision that it deemed incredibly damaging. It also saw the party leadership struggle with its commitment to internal democracy when the membership did not mirror the country at large. These problems are far from over for Labour, which needs a period of deep self-reflection that hopefully these leadership elections will not block entirely. 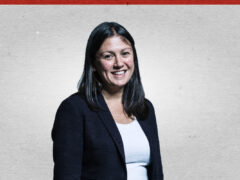