The reality of Labour’s election defeat, and the Tories in charge with an 80-seat majority, is already hitting home. In Westminster, we’ve seen Boris Johnson whipping his MPs to use child refugees as a bartering chip with the EU. And the newly elected Conservative MP for Gedling – my former constituency – is one of them.

Meanwhile in Nottinghamshire, the Tory-run county council has announced huge cuts to pregnant mothers’ mental health support and children’s speech therapy. This is the reality of the Conservatives in power. The election loss means that out of the eight seats within the boundary of Nottinghamshire County Council, there is not one Labour MP.

In too many communities up and down the country, our voters – lifelong Labour voters – turned away from us. Despite grinding Tory austerity, their failure to tackle violent crime, homelessness skyrocketing and an NHS at crisis point, Labour fell a long way short. Communities that are already suffering from the consequences of a decade of Tory failure did not see Labour as an alternative.

We need a leader who can bring these voters back. The stakes are high in this leadership election: we know that the Labour Party has a lot of work to do if we are to form a future government. I fought nine general elections in Gedling, taking it from the Tories in 1997 and proudly standing up for my constituents for over 20 years.

I am backing Keir Starmer to be Labour’s next leader because I believe he has got what it takes to win back seats like Gedling. Keir has spent his life fighting for a fairer country and defending trade unions. He has proven that he can take on Boris Johnson and expose his lies and hypocrisy.

I served as Minister for Policing, Crime and Security while Keir was Director of Public Prosecutions. I saw first-hand his forensic attention to detail, his commitment to public service and his ability to lead a large, complex organisation. He was never afraid to stand up for what was right, whether it was prosecuting phone-hacking Murdoch journalists or tackling domestic and sexual violence against women.

There is no doubt that the Labour Party needs to rebuild trust with communities across the country. From my conversations on the doorstep, it’s clear that people have trust in Keir. He has shown he can deliver in parliament and I know he will be a Prime Minister in waiting from his first day as Labour leader.

Like Keir, I believe that another future for our country is possible – one of unity, not division. The Labour Party has delivered some of our nation’s proudest achievements, from the NHS to the welfare state. We have made a profound difference to the lives of millions. I know that we can do that again. We need to be positive and forward-looking and proud of our country.

Whether it is the housing crisis or the climate crisis, the next Labour government has to take on these big challenges and build a better tomorrow. We must reconnect with communities across the country, in seats like Gedling, Mansfield and Bassetlaw, seats in the Midlands and the North.

The Tories have shown they will not confront the big barriers to a fairer society. Under Keir’s leadership, we can build a strong, effective opposition to expose that. We can rebuild the public’s confidence in our party and put a Labour Prime Minister into Downing Street. 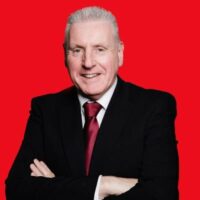 Vernon Coaker is the former Labour MP for Gedling (1997-2019) and a former government minister.

View all articles by Vernon Coaker