The Labour Local Government conference taking place in Nottingham today will hear from all four of the party leadership candidates at another hustings event. But this is a hustings with a difference. An audience of councillors and mayors from across the country is an audience with the party’s real campaigners-in-chief – if I do say so myself – with direct experience of the difficult doorstep conversations that were had last December. And even more crucially, a meeting with those representing Labour in power.

Many of us here have direct experience of delivering for our communities – in the Welsh government, regional authorities, and in local councils. We are implementing Labour’s values in our local areas, being collectively trusted with billions of pounds of public spending every year, and acting as the real ‘red wall’ between our communities and this Tory government.

In the build-up to the hustings this week, we have heard from all four candidates who have written in more detail about their approaches to working with local government colleagues. As a leader in local government who is undecided, I have been asked to share my thoughts and what I am hoping to hear this weekend.

When it comes to discussing the power of local government and devolution the candidates have, so far, been largely singing from the same hymn sheet. All candidates attribute Brexit to a feeling of lost power and place, and see devolution and more democracy as one of the answers.

We have heard from Keir Starmer this week who has called for a constitutional convention, devolving power from Westminster with an aim to “set local government free”. ‘Power away from Westminster’ is a well-worn metaphor but as others have said, Westminster and Whitehall can feel as remote to the needs of London’s boroughs as they can in Carlisle or Plymouth – so it isn’t just about geography, but also who has power.

Rebecca Long-Bailey puts this front and centre in her pitch this week, labelling the “over-centralised governance system” as a contributor to the “feeling of powerlessness and falling behind of local communities that the Brexit vote exposed”. Importantly, both her and Emily Thornberry make the link between community campaigning and local councillors as one of the solutions.

This valuable community role in the party, with councillors dedicating hours each week to casework and campaigning for our communities, is hardly recognised by current party structures. Labour councillors are the second largest contributor to the national party, raising £2m every year through the councillor levy. Yet central resources rarely trickle down to the frontlines of local government campaigning, nor is there meaningful involvement for us in forming national campaign strategies in local elections.

To repair this bridge between local groups and the national party, one point of Thornberry’s three-point plan includes a full time organiser for every Labour group in the country. This would make sure we get the share of the party resource that we contribute, and send a strong signal internally and externally that the national party is there to support Labour councillors, not to undermine them.

Lisa Nandy points out in her article the link between local and national results, highlighting the loss of Darlington Council last May followed by the loss of the parliamentary constituency six months later. Building on this, she calls for local government to be “empowered with a greater influence at every level of the party”.

Nandy specifically references the national executive committee (NEC) but stops short of making a specific suggestion to alter the party’s ruling body. Starmer makes more than just signals, specifically stating he would increase councillor representation on the NEC and deepen the relationship with shadow ministers. Nandy has gone further and offered a place in the shadow cabinet, a role in future leadership nominations and dismantling of local quangos.

But there have also been too many missed opportunities by all of the candidates so far to reference the radical policies that Labour are implementing in their local areas. Hustings have discussed nationalising industries, social care, social security, and the climate emergency without mentioning local authorities’ role in all of those issues.

The green industrial revolution was a highlight of the 2019 manifesto, so this week it was good to see Long-Bailey and Nandy highlight our role in tackling the climate emergency. The Local Government Association (LGA) has already done extensive work to show that the ambitions of Labour councils are being met with real action on the ground. But we need the Labour frontbench to shout about our work ─ from investing in renewable infrastructure to setting up publicly-owned, municipal energy companies.

Nandy highlighted an important point about the nationalisation debate that many of us in local government have been saying for years: why stop at nationalisation? Why create public structures that can be so easily torn-down by new Tory governments? Listen to the good work of Preston Council, highlighted by Starmer, who are disrupting private markets and building community wealth in their areas through co-operatives, social enterprise and council-owned public services and from him the cherished hope of greater fiscal independence.

What do we need more of today? A good start would be a clear recognition of a need for cultural shift in our party, so that we can bring about radical change to the country; clear promises to give more power to local government; and clearly pledging to endorse LGA Labour’s 10 pledges.

Once the wooing is over and the selection won, we must ensure that unlike so many past Labour leaders they don’t turn their back on Hackney, Halifax and Hartlepool, stop listening, infantilise local government in the party and develop only Whitehall-based solutions. I for one am looking forward to uniting behind a new localist vision of Labour. 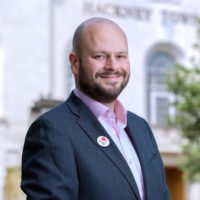