The London elections this May are going to be the first test for Labour’s new leader – but it’s the way we run London if we win that is the Labour movement’s real test. It’s not enough to leaflet and hope to coast through the next few years; we have to be on the ground every day, fighting to represent the people in London who need it most. That’s why I’m running for the West Central seat on the London Assembly.

I know how much we need this. When I started primary school in Paddington, I couldn’t speak a word of English – but I had to learn to speak up for my family and my community. I’ve been fighting for them ever since, but there’s only so much one person can do. I was inspired to join Labour by Karen Buck, my local MP and a great crusader for the voiceless in Westminster North. That’s the standard I’ve held myself to ever since, becoming the first Labour councillor in Maida Vale since 1986 and working day-in and day out to convince people who’d never supported us before that Labour can and will work for them.

West Central has been held by a Conservative ever since the London Assembly was created. In that time, our housing has become more unaffordable, our youth services have been decimated by Conservative councils, and government cuts to the NHS, welfare and police have made our families’ lives harder. But the current assembly member, Tony Devenish, is only interested in copying his Tory predecessors and using us as a stepping stone to becoming an MP, spending his time and energy trying to get selected in Westminster seats like Kensington.

That’s not how I hope to do things. I’m not here to parachute in and leave for a better opportunity; we need representatives who can live and fight with us. I’ve worked with people across this city to mobilise communities, build relationships, give a voice to the marginalised and win victories against the Tories. I’ve helped keep local youth clubs open, fought to save Charing Cross Hospital, campaigned for a final say on Brexit, and helped get respite breaks for families affected by Grenfell.

That’s how we can win West Central, and how we can build real trust between representatives and the represented. It’s how I’ve beaten Tories before, won real victories for my constituents, and proved to sceptical voters that Labour will represent them.

I will campaign for more good-quality council homes and to protect residents from the developers and councils that try to short-change them. I’ll work alongside the mayor’s campaign to introduce rent controls and a universal landlord register to crack down on rogue landlords.

A green new deal for London

I will invite the distinguished left economist Ann Pettifor, as well as other experts, to advise the mayor and the London Assembly on the creation of London’s green new deal – from the small ideas that make our lives greener and healthier to a city-wide plan for transition.

London is a global city and should be open to all. We must fight against racism, anti-semitism, Islamophobia, homophobia, and any kind of prejudice. I will stand with the mayor to fight for fairness for all, regardless of race, gender, background, or disability. I will fight for you.

The Tories cut 91% of the youth services budget in the City of Westminster – and the same story has played out in Tory-run areas across London. To truly tackle crime we need to restore these services, better housing, jobs with a future, and more community-based police. 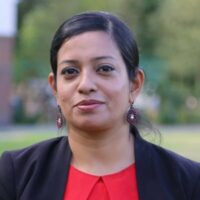 Rita Begum is a Labour councillor on Westminster City Council.

View all articles by Rita Begum