As such, it is an election that I would imagine the various leader and deputy leadership contenders are paying very close attention to – and if they’re not they should, because for Labour to win a general election we need to recover again in Scotland. The reality is that we won’t win by looking back to the past for answers. We have to embrace a new generation and look to them for the fresh future that Scottish Labour needs. Matt Kerr embodies, and is part of, that new generation.

To recover in Scotland we must reach out to, and win back, those voters Scottish Labour have lost in the 21 years since devolution. We will not do that by looking back, instead we must look to the future for answers to the problems we face. The truth is that it is time for a heavy dose of honesty for those of us in the Scottish Labour Party – and to admit that we have a deep-rooted image problem.

Labour – the dominant force in Scottish politics for decades, so dominant in our heartland areas that people used to say they weighed the Labour votes or that a donkey wearing a red rosette would get elected here – has been sidelined into third place behind the Tories. And for the second general election out of the last three we have been reduced to just one Scottish MP.

We have been steadily declining since the establishment of the Scottish parliament in 1999. The consequence of complacency and entitlement from the top of our party that saw us never fully come to terms with losing power to the SNP in 2007.

Despite that steady decline we must remember that, as Scotland went to the polls for the independence referendum in 2014, Labour had 41 Scottish MPs and were firmly the official opposition to the SNP government with 23 MSP’s more than the Tories. Scottish Labour were central in 55% of Scots saying no to independence, it was our elected politicians and activists who were the driving force for Scotland saying no – but it came with a very heavy political price.

It is time for the party’s establishment, those who signed us up to participate in Better Together, to hold their hands up and own the ongoing political damage they inflicted on the Labour Party in Scotland. Labour could have helped defeat the nationalists case by sticking to our Labour values, making the socialist case for solidarity across our islands and the redistribution of wealth and power. Instead, we were handcuffed to a Tory-Lib Dem coalition that was imposing austerity on us and enacting some of the most pernicious welfare reforms imaginable.

We left the progressive field completely clear for the nationalists to steal our political clothes and with them many of our traditional voters. The result has been that the image of Scottish Labour – already out of power having lost the trust of many voters – being part of the establishment rather than the party challenging the establishment as we should be, was set in the minds of working class families up and down Scotland.

Our image problem means that, no matter how progressive, radical, transformative and popular our policy platform is, there are sections of the electorate who refuse to give us a hearing. And it does not allow us to break through the constitutional wrangling that suits both the SNP and Tories electorally.

The time is now to recognise this problem and fix it. Since the 2014 referendum Scottish Labour has had four leaders and four deputy leaders. We certainly do not need another leader, as that will fix nothing. In fact, wouldn’t it be a novel idea to give our leader Richard Leonard the time to rebuild the party with the support of a united party? But we do have another deputy leadership contest. And that has presented an opportunity to take a very different approach that addresses our party’s image problem.

There is talent across the Labour movement amongst our councillors, activists, co-operators and trade unionists. But too many of their talents have not been recognised by a party that has placed political power in the parliamentary groups. Each and every one of the eight holders of the leadership roles since 2014 have been parliamentarians. Until now.

Matt, as an active trade unionist and councillor, offers different answers to the problems that we have failed to address. He represents an opportunity to rebrand how the Scottish Labour Party looks and feels to voters – being the catalyst for a new generation of leaders, from across our whole movement, that will allow us again to get a fair hearing on policy and values from an electorate who have repeatedly rejected the same party establishment over the last few decades.

Matt’s opponent purports to be the ‘change candidate’ in this contest, but the hard and fast fact is that Jackie Baillie has been a senior MSP for 21 years, built into the brick work of a Scottish parliamentary group that has reduced in size at every election. Not only was she a supporter of Better Together but in fact a Director of it. The notion that we can present Jackie as ‘change’ is fallacy. It would not represent change, it would be more of the same and do nothing to repair our image problem.

I am fed up of losing. And so are our members. I know the difference that Labour can make in power because I do it every day as a Labour council Leader. And our members want us back in power so that we can start making a difference to peoples lives across the country.

We will only be able to do that if we can reconnect with communities and rebuild trust in our party; if the party is united in fighting for our cause not indulging in the leaks and briefing culture that has emanated for too long from the upper echelons of the party and parliamentary group. Only Matt can help us achieve that, more of the same just won’t cut it.

This is not the left-right contest that so many Labour leadership contests are dubbed. This is a status quo or fresh future contest. It can fix our image problem, build up the fragile confidence of our membership, remind people that it is Labour that has the vision for a better Scotland and better world and in so doing reconnect our party with the communities we seek to represent and give our movement back a Scottish Labour Party that they are unashamedly proud to be a part of.

For these reasons, the Scottish deputy leadership election is even more important than the UK leadership contests. Regardless of who is the UK leader, they will not get a hearing from the Scottish public if Scottish Labour does not change. And Labour cannot win a general election without Scotland. I would urge party members, councillors and affiliated supporters to vote for a fresh future for Scottish Labour and campaign, support and vote for Matt Kerr. 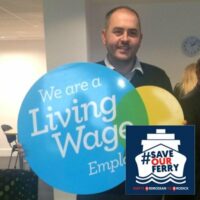 Joe Cullinane is a Labour councillor, the leader of North Ayrshire Council and co-chair of Matt Kerr's campaign to be deputy leader of Scottish Labour.

View all articles by Joe Cullinane