The 2019 general election was a rude wake up call for the Labour Party. Despite a progressive manifesto, it was a defeat of epic proportions. Of course, this has led to a series of op-eds and ‘expert’ pieces about what Labour needs to do to rebuild its base in the so-called ‘heartlands’. As a BAME member of the party, I have been quite shocked at some of the ways in which the narrative has been framed as a fight between traditional white, working-class Labour voters and the party’s multi-ethnic supporters in urban cities.

We must remember that Labour’s heartlands are not just Bolsover and Bury, but also places like Newham, Hackney and Tower Hamlets. In fact, an Opinium poll just before the election showed that Labour was 25 points ahead of the Tories amongst BAME voters. It would be a colossal mistake for Labour to turn back on this support.

BAME people within Labour have often complained about feeling underrepresented within the party structure – one only needs to look at the struggle Dawn Butler and Rosena Allin-Khan had to go through before they could even reach the membership ballot stage. We should also be mindful of the fact that the BAME umbrella is far from homogenous. In recent years, we have seen that black solidarity, which was the foundation of the anti-racist/anti-fascist movement, being eroded with communities pitted against each other.

What we seem to be missing is the politics of solidarity and intersectionality. The 1980s and its horrible racist violence also brought together youths of African, Caribbean and Asian origin under a common banner to fight the forces of racism. In our narrative to understand Labour’s loss, people have been conflating the entire working class with a marginal segment who did vote for the Tories against their own interests but such a false narrative leads to greater division. Though we might have been told differently, there is actually more in common between white and BAME working class than people would like us to believe.

At the same time, it is important to acknowledge that some sections of the BAME community have indeed abandoned us, notably Indian and Jewish communities who feel that the party is not reflecting their interests. The current complaints process in the party is slow – unable to resolve the antisemitism, homophobia and racism that Labour members have faced – and has left many feeling unsupported.

As a person of Indian origin, I should point out that Labour has always been the natural home for Indians. The first Labour MP of Indian origin, Shapurji Saklatvala, was famously arrested in 1926 for a speech he made in support of striking miners and jailed for sedition. Radicalism and socialism is the cornerstone on which the Indian independence struggle, and indeed the state of India, was formed.

Whilst issues such as Kashmir did indeed play a role in pushing many Indians away, it would be wrong to say this was the only reason for Indians moving away from the party. Many Indians were rightly concerned at their lack of representation on party committees and among candidates. And whilst programs such as the Bernie Grant leadership programme are indeed welcome – we still have to acknowledge the lack of male Black MPs in Westminster.

Where do we go from here? The answer is to not turn our back on the BAME community in order to try and gain votes elsewhere, but to actually continue with our radical, people-focused programme to transform society. This also brings me to political education – one that does not just gloss over the history of the British empire, and instead critically teaches what that meant for many of us who now call Britain home. This also means we take an uncritical approach to immigration and borders, rather than buying into the narrative of scapegoating migrants.

There is a need to develop a more ambitious social integration program through our community organising and tell the story of what unites us: the shared oppression and common struggles that all working people face regardless of our ethnicity, gender or sexuality.

Injustice and structural racism permeate our political system and it is not enough to just include one BAME person on every shortlist. Representation matters and Labour must make it a priority to include more BAME people in target seats. As Operation Black Vote found, the BAME vote was crucial in almost 100 marginals. The party must accept that mistakes were made and we were not quick enough in tackling those and the only way to rebuild that trust is to go back into those communities and meaningfully engage with them and above all listen. 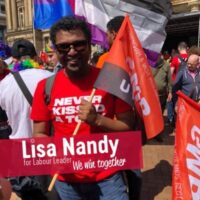 Dr Rohit Dasgupta is a councillor in the London Borough of Newham and a former UK parliament and European parliament candidate.

View all articles by Rohit Dasgupta