The House of Lords is an almost all-appointed upper chamber, whose members are generally nominated by the two main political parties. Once appointed, peers sit for life but can then attend more or less whenever they wish, never facing re-appointment or any form of election.

The power of the Lords is limited to amending or delaying non-financial bills and members follow a convention which acknowledges the primacy of the Commons. The Salisbury Convention guarantees the passage of any bill for which an elected government in the House of Commons has a majority and made a manifesto commitment.

The Burns report in October 2017 recommended changes to the composition of the Lords, such as capping the size to 600 members and introducing 15-year fixed terms for new peers. Those recommendations were backed without opposition in the House. Crucial to the proposals was the twin objective of reducing the size of the chamber as it currently stands, and addressing the overall tendency for its numbers to increase as appointments are made by different Prime Ministers and parties.

The report recommended the introduction of a ‘two-out-one-in’ system, which would allow a gradual reduction in the size of the House by ensuring that any new appointment could only be made once two existing members had left. But nothing has actually changed.

Under Jeremy Corbyn, the Labour Party has only made seven appointments to the Lords on specific grounds, and has promised to scrap the Lords as currently constituted. In nominating peers, the Labour leader required all new appointees to vote whenever possible for creating an elected upper chamber.

Of those seven appointments, I am the only local government representative – and indeed I am the first serving Labour council leader to be elevated to the Lords since Peter Smith of Wigan was ennobled in 1999. There are others with longer term local government associations, including former council leaders such as Jeremy Beecham, Steve Bassam, David Blunkett, Toby Harris, Bill Mackenzie and Dave Watts.

There is a more noticeable representation of local government within the Lib Dem group since its ranks were swelled disproportionately during the Cameron/Clegg coalition. Indeed, the Lords now appears to be the only legislature in the UK where the Lib Dems have any significant presence.

Analysis shows that nearly three-quarters of the 62 peers appointed in the second half of 2015 were former MPs, special advisers, or party aides. Only four academics and two NGO or third-sector figures entered the Lords during this time, suggesting that little diversity or expertise was being brought into play. Just over a quarter were women and only 6.4% were from black or minority ethnic groups. Territorial representation was particularly poor, with limited representation of those outside the southeast of England.

While the Lords exists, I believe it is important that we have the strongest available Labour voices there to make sure that the government is held to account, and that our party’s priorities are pushed as strongly as they can be with an 80-strong Tory majority in the House of Commons.

The upper chamber should contain people from various walks of life but also people who have expertise that can add to the overall contribution that the House makes, and I would argue that there is an untapped mine of that expertise in councils across the UK.

Councillors are the drivers of frontline politics, not the political back office. They are not elected as flatterers of the public and most try to speak with honesty and candour. They do not see their reason for existence as a quest for short-term popularity.

Councillors have accepted that in the climate of a decade of continuing austerity they have an arduous role to perform. They seek to do all they can to preserve communities, to safeguard treasured services, to promote wellbeing but also to take tough decisions because there is no escape from the legal imposition of setting a balanced budget.

Over the past month, I have heard some wonderful contributions to debates from Labour colleagues in the Lords and I bow to their incredible collective wisdom. I also know from experience that our peers are very grateful for the expert briefings they receive from the Local Government Association. But I would like to see more of my local government colleagues sitting alongside us on those red benches while we battle the interminable intolerance of the Boris Johnson government. 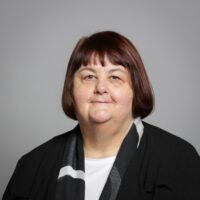 Debbie Wilcox is a Labour member of the House of Lords, leader of Newport Council and former leader of the Welsh Local Government Association.

View all articles by Debbie Wilcox