It seems crass to wonder what the long-term effect of coronavirus may be on British society when the pandemic is still raging. Nevertheless, politics is a crass business, and it is worth thinking about for those of us self-isolating whilst our NHS and others work miracles daily to keep us all safe. Because a global pandemic is something that the divisive them-and-us populist politics of the last few years – whether of the Trumpian, the Corbynite or the Brexiteer variety – simply cannot cope with. Coronavirus is not susceptible to pithy slogans or social media pile-ons or references to the Blitz spirit. Britain will not be the same after the pandemic as it was before. And my bet is that it will move us in a direction away from the atomised individualism of the last 30 years.

A pandemic on this scale can only be managed by the power of the state stepping in to protect individuals, reminding people of the vital importance of government and state intervention. Self-isolation and quarantining – particularly of the elderly and the vulnerable – has led to a rise in community support groups. Videos from Italy of spontaneous communal singing and concerts have gone viral. There is a palpable sense of coming together in the face of adversity. We are also seeing interventions into the economy from governments in France, Spain, the UK and elsewhere greater even than those that followed the 2008 crash, making a mockery of notions of laissez-faireism.

This may be pushing at an already opening door. Since the publication in the year 2000 of Robert Putnam’s seminal study on society’s move away from communal activities – Bowling Alone – there has been evidence emerging of young millennials recombining into the kind of community social activities their grandparents pursued and their parents avoided. Book groups, crafting circles, board game societies and other such organisations are on the increase. Many millennials are forced to live in flatshares, making the experience of communal living more typical.

The 2008 crash showed how an economy built on radical ‘greed is good’ individualism would eventually collapse and require a bail-out from taxpayers acting as one through the state. All of this has meant we have been heading in the direction of a more cooperative and community-focused society. It was one of the more promising themes of the essays contained within The Labour Tradition and the Politics of Paradox, before that was twisted by Blue Labour and its march off into xenophobic irrelevance.

Those essays are worth revisiting, and the theme of communitarianism – the politics of Robert Owen, Clement Attlee, Nelson Mandela, Martin Luther King and Bobby Kennedy – most certainly is. Communitarian concerns over not just individual liberties but how those liberties fit together for the common good are re-emerging. It has been one of the factors behind Lisa Nandy’s unexpected rise to the final stage of the Labour leadership race.

The liberalism of post-1979 has been predicated on the individual and free choice in a free market. But neither individuals nor free markets can cope with a pandemic. From panic-buying to the imminent collapse of the economy, the evidence for that is abundantly clear. What is needed is the heavy-lifting power of the state coupled with the combined will of our whole society – not just the many nor the few but all – to check up on neighbours, self-isolate and keep each other sane. Our response to coronavirus means that society is being forced to relearn a grisly lesson – that we are all invested in one another. Only social solidarity can stand against the virus.

The effects of the solidarity that came about after the Second World War lasted for thirty years, Les Trente Glorieuses as it was known in France, and produced amongst other things the NHS, much of our welfare state and the European Community. The current situation is unlikely to have as large an effect, but we must entertain and explore the possibility that it probably will do on a smaller scale. It may give us a moment of clarity when the pendulum of history swings back towards common endeavour. Labour and its new leadership team need to think about what to do with that moment. 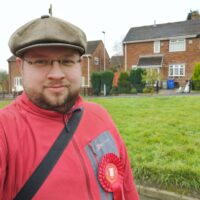 Luke John Davies is a PhD student in social democratic parliamentary recruitment and member of the Fabian Society executive committee.