When outgoing Labour leader Jeremy Corbyn met the Prime Minister on Monday evening, he stressed that his party would “hold the government to account to ensure no-one is left behind” due to the Covid-19 pandemic. He again put forward the list of demands that he had sent Boris Johnson over the weekend: extend sick pay to all workers; increase sick pay; introduce rent and mortgage payment deferment options; ban coronavirus evictions; remove the requirement to present for Universal Credit and reduce the waiting time; support councils working with food banks.

These are vitally important demands. Enabling the low-paid and self-employed who are not currently entitled to statutory sick pay to receive that crucial money, and raising the level of SSP so that people can actually live on it, would make a huge difference in particular. And while younger people are not likely to die from being infected, we can nonetheless suffer horrendous symptoms and be hospitalised in critical condition. Those with underlying medical conditions even more so. The risk of not being to make rent payments during this time – and they are very high in London, where the outbreak is advancing quickest – must be addressed.

But let’s compare the demands being made by Labour to what is actually happening in other countries hit by Covid-19. Ireland has introduced a new coronavirus unemployment payment of €203 a week. Emmanuel Macron has promised French businesses that not a single one will be exposed to the risk of collapse. The Norwegian government has offered full pay for 20 days to those temporarily laid off, while the self-employed and freelancers will receive income protection. Sacked workers in Sweden are guaranteed 90% of their income, with the government paying half and the employer the other half. Spain has nationalised private hospitals. And as highlighted by Rebecca Long-Bailey in her latest campaign email, the UK is way behind other European countries on levels of sick pay, so we have a worse starting point. 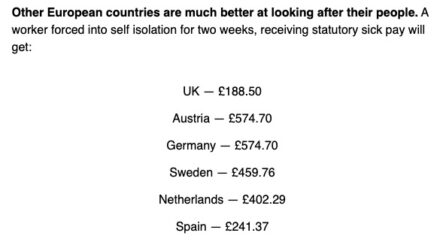 Now let’s compare Labour’s demands with the editorial by ConservativeHome published today. Yes, that’s right – the Tory equivalent of LabourList. Paul Goodman, the former Conservative MP and current editor, advised his party to “tear up the rulebook” as “we need Big State government on a scale unknown in modern times”. He said this state intervention should include part-funding employers and workers (like Denmark), and suspending mortgages, rent and household bills (like Italy). He even linked to a tweet by Tribune editor Ronan Burtenshaw to make his point. And yet Labour is talking about deferment of rent, not suspension, and has not gone far enough with proposals to protect workers.

Despite even commentators such as Dan Hodges urging Rishi Sunak to “make [John] McDonnell look like a founding member of the Adam Smith Institute” this afternoon, it seems unlikely that the Chancellor will announce new proposals that match up to the policies being implemented across the rest of Europe. Not yet, anyway. But there is significant pressure being applied on the government. Although a Labour leadership election is underway, both the current team and the incoming one cannot let that get in the way of making immediate demands.

Despite being frontrunner, Keir Starmer has so far only posted the odd tweet about coronavirus and made no specific demands. It is understood he takes the view that things shouldn’t be said ‘for the sake of it’, and there are many in Labour who reckon the party must tread carefully or be accused of ‘playing politics’. But to describe the solutions to this crisis as political is not to demean it, and being overly cautious is not an option in this crisis – even in opposition. Urgent action is required now to save lives, not just directly with improved NHS capacity and wider testing but also through bold economic measures. Don’t let us be outflanked by high-profile Tories – the country needs leadership from a Labour Party with the interests of the working class as its top priority.