The government is muddling its way through this crisis amid strong criticism from many in the science community, and even from within the Conservative Party. Yet there have been calls from journalists and those within the establishment to defer to the government and effectively suspend any criticism in the name of national unity. To follow that advice would be a disaster.

The foundations of this crisis are political. A decade of austerity has resulted in severe cuts to the NHS, an emaciated welfare system and millions of people stuck in low-paid, precarious work. A society with a crippled health service, a bare bones welfare state and dwindling secure employment is a society ill-equipped to deal with a public health crisis. The Tories have left us exposed.

Now they are refusing to step in when we need action. Business loans and mortgage holidays simply are not going to cut it. There are millions of people – renters and workers on precarious contracts – who are crying out for assistance, but the government is seemingly ignoring them.

We need a great national mobilisation to force this government to take action. Already, demands for the government to suspend rent and bill payments, guarantee full sick pay for all workers, including those on zero-hour contracts, and end all benefit sanctions and delays are gaining popular support from the left and the right. The editor of ConservativeHome, Paul Goodman, has even penned an article advising the government to extend statutory sick pay to all. There is a consensus emerging across the country: we bailed out the banks – now it is time to bail out the people.

Starved of funds for the last decade, it is also clear that the health service is in dire need of emergency state assistance. The government must requisition private hospital beds and the testing capacity of private clinics such as Harley Street to meet the scale of the crisis that is to come – and provide our hard-working NHS staff with the requisite protective equipment and Covid-19 testing to be able to do their jobs safely. In our time of need, the government must do all it can to protect those bravely working on the frontline. And it must also support everyone who resides in this country, regardless of their citizenship. No migrants should be charged for accessing the NHS. Coronavirus does not discriminate, and neither should we.

Finally, the public is owed the truth – at all times. The government has already changed course on its policy once. Realising that the strain on our health service and the death toll would be too great, they have abandoned their “mitigation” policy and taken the social distancing measures that were being demanded by the World Health Organisation. We need transparency in order for there to be scrutiny. It is clear that we cannot simply trust that the government will act in our best interests. We must hold it to account at every stage.

This is a global crisis, and so the response to this must be international. Up against the authoritarian, populist right across the globe, who look to patent cures only for their people or blame the crisis on migration, we need to collectively stand up for everyone of all races, creeds and religions across the globe. Governments will need to coordinate to institute drastic fiscal measures to ease the impact of this virus on us all.

Thankfully, we’re already seeing some centre-left governments act. Spain has enacted legislation that brings private healthcare providers and suppliers of protective gear under public ownership. Meanwhile in Denmark, the government has pledged to pay 75% of the wages of workers in industries shuttered or slowed down by the coronavirus. In Ireland, a new unemployment payment of €203 a week has been introduced. In Italy, the government has announced that utility bills and mortgage payments can be suspended.

It’s not just governments that are acting – so are the people. Across the world, in de-regulated, neoliberal economies, citizens are stepping up to pressure governments to act. In lieu of adequate welfare provision, citizens are providing a safety network required to protect those who will need it most.

In the UK at the end of last week, as news of the crisis became more grave, community action groups began to spring up. People are pledging to use their time to make sure that the vulnerable in their area are provided with prescriptions, food and other essentials in their time of need. There are now thousands of these groups across the country, with thousands of people as we speak coordinating through WhatsApp groups and via Facebook to provide help in a safe and hygienic way.

As this crisis unfolds, Momentum will dedicate significant resources and staff time to pushing the government to concede to the aforementioned political demands and to strengthening the community support groups across the country. We will start by repurposing My Campaign Map – an online tool used previously to direct people to canvassing sessions during elections – to give people information on the best grassroots initiative near them. We will get through this crisis if we work together.

Over the last decade, the government refused to “fix the roof when the sun was shining”, leaving our society vulnerable. Underfunding the health service and stripping away the welfare state was a disaster that will have consequences. But there is no time to mourn these decisions. This crisis will require a national effort that we can all be a part of. As citizens we must now act to look after the vulnerable and demand the government steps up and acts in a way that is adequate to the crisis. Lives and livelihoods are on the line. 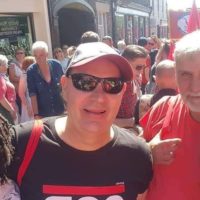 View all articles by John Taylor