The tensions between national sovereignty and the desire to open up markets in Europe that follow from European integration, have not plagued Labour to anything like the same degree as they have the Conservative Party. Indeed, since the late 1980s most Labour MPs have supported integration as a means of regulating markets and working conditions.

Yet divisions have persisted within the Parliamentary Labour Party (PLP) – most obviously since June 2016 on whether a second referendum should have been held and on precisely what kind of relationship the UK should pursue with the EU. These divisions have been partly about differences between representatives and those that they represent.

In its 2017 manifesto, Labour pledged to respect the referendum result while opposing ‘no deal’, and aiming to capture the benefits of the single market and customs union in a withdrawal agreement. But in 2019 the party’s position changed, instead offering voters a re-negotiated EU withdrawal agreement followed by a referendum which would include an option to Remain. This shift reflected a compromise between different views within the PLP, as well as divisions among putative Labour voters – three-quarters of whom were self-reported Remainers and one-quarter Leavers.

If we go back to the 2016 referendum, data on MPs’ referendum positions show that just ten of Labour’s then 232 MPs voted Leave in the referendum. However, estimates of the Leave vote in each constituency suggested that 148 of those 232 Labour seats saw a majority vote Leave. While Labour was not alone in experiencing MP-versus-constituency differences, the proportion of seats in which a majority voted a different way to their MP was higher for Labour than for the Tories. In 142 constituencies, a Labour MP voted Remain while the majority of the constituents voted Leave – in only four cases was it the other way around.

This tension was played out in the subsequent votes in the Commons over the period following the referendum. In February 2017, a total of 47 Labour MPs chose not to follow the party whip and instead voted ‘no’ to the second reading of the European Union (Notification of Withdrawal) Bill – the legislation authorising the UK government to notify the EU of its intention to trigger Article 50 of the Treaty on European Union. In most cases, these 47 MPs represented constituencies where more than half of those who voted in the referendum had backed Remain – however, seven of them were MPs for Leave seats.

Looking at the justifications offered for these decisions – via the MPs’ websites and contributions to House of Commons debates – shows that some argued that they could not support triggering Article 50 until they knew more about the government’s negotiating priorities. Others either did not believe that leaving the EU would be in their constituents’ interests and/or explained that their belief in the need to remain in the EU was not something they were prepared to abandon.

The 2017 election did not see the arrival to parliament of any new Leavers among Labour MPs. Nine of the ten Labour Brexiteers from the previous parliament were still present – but comprised just 3% of the PLP. This did not mean, however, that Labour was entirely united in its voting on Brexit-related issues over the subsequent two years. The tensions between constituents’ views and those of MPs, along with different opinions about what a future UK-EU relationship should look like, led to resignations from the shadow cabinet and 128 Labour MPs rebelling at least once on Brexit-related votes.

Three votes during the passage of the European Union Withdrawal Act highlighted the scale of Labour divisions. In all three cases, Labour MPs had been whipped to abstain – in itself an indication of the difficulties that the party was facing in reaching a unified approach. In a vote on staying in the customs union in December 2017, 63 Labour MPs voted in favour and four against. A month later in January 2018, 48 Labour MPs voted in favour of keeping the UK permanently in the single market and customs union – with four voting against. Then in June 2018, some 73 supported membership of the European economic area.

The PLP also suffered from division during the March 2019 indicative vote sessions on different options for a UK-EU relationship. The proposal to hold a second referendum saw 198 vote in favour and 27 against – a significant split, given the option’s similarity to Labour’s 2019 election promise.

But what of the future? After the 2019 general election, only two of the Leavers who had been present in the 2015-17 parliament are still on the Labour benches. That leaves them vastly outnumbered by the 79 MPs – including nine of Labour’s 26 new MPs – who had signed the Remain Labour campaign pledge. A pledge that committed them to campaigning for Remain if a second referendum was secured. When the EU (Withdrawal Agreement) Bill reached second reading in late December last year, only six Labour MPs voted in favour – although more than 30 opted not to vote. The limitations on parliament’s role in approving any future agreement relationship with the EU, combined with a substantial Conservative majority, mean that Labour – and its new leader – will struggle to influence EU-UK relations in the short-term.

Of the three leadership contenders, none signed the Remain Labour pledge. Keir Starmer was very closely associated with Labour’s call for a second referendum but this is unlikely to damage him with what is now an overwhelmingly pro-European party. Were his Corbynista rival Rebecca Long-Bailey to become leader, however, then there is speculation that tens of Labour MPs might leave Labour – although whether her more ambivalent views on Europe would be the primary cause of their putative departure is surely debatable. Whoever wins, though, the PLP is likely to be united on some areas of policy that were previously in the realm of the EU than on others. Given the range of seats represented by Labour MPs, immigration may well be one to watch. 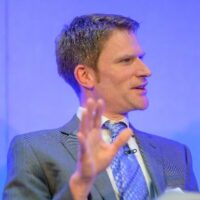 Richard Whitaker is a associate professor in European politics at the University of Leicester.

View all articles by Richard Whitaker