Factionalism has bedevilled Labour since its creation. Repeatedly papered over, factional splits between the left and right within Labour have consistently emerged in response to social, economic and political change. The history of this process highlights three key dilemmas for the Labour leadership today: how to preserve party unity while reinventing itself in the new world; how to deal with the debt and deficit after Covid-19; and how to win back Leave-supporting voters.

No Labour government or opposition has been immune to the left vs right battle. Even the much-venerated Clement Attlee government saw the rise of a group called ‘Keep Left’ that advocated a more radical nationalisation programme and a neutral foreign policy towards the US. This prompted a ferocious battle throughout the ’50s over how the party should adapt to the post-war world and the rise of the affluent society.

This battle was brought under a temporary truce under the brilliant leadership of Harold Wilson, only for it to erupt spectacularly after his general election loss in 1970. The fight was waged throughout the ’70s, as Britain wrestled with stagflation. The left, led intellectually by Stuart Holland and charismatically by Tony Benn, developed the Alternative Economic Strategy (AES) to remedy Britain’s financial problems.

The AES was a model based on nationalisation, economic planning, industrial democratisation and a more protectionist stance on the economy. This was the polar opposite strategy to what Keith Joseph and Margaret Thatcher were cooking up with the beginnings of neoliberalism – a model based on free markets and deregulation. The AES reached its apogee with Labour’s 1983 manifesto, which promised to bring about a “fundamental and irreversible shift in the balance of power and wealth in favour of working people” – pretty much the same phrase as the one contained in Jeremy Corbyn’s 2019 manifesto.

The 1983 defeat marked a new beginning of the Labour right. Starting under the soft left with Neil Kinnock and ending with Tony Blair, the Labour right neutered the left and moderated the party’s policy position. It ended with Gordon Brown promising to follow the then Tory government’s budget plans leading into the 1997 general election.

This brief history demonstrates a pattern: as the world and country changes, the left and right battle flares up and the party struggles to transition into the new world. This is the party’s first conundrum – how to keep Labour united, while at the same time reinventing itself.

The 2008 financial crash brought the New Labour economic model to a shuddering halt. No longer could New Labour rely on the tax revenues from the city to pay for the public spending the Labour government had embarked upon. The emergency response from Brown was to spend initially, but then to gradually reduce public spending over the longer term.

With the 2010 defeat, the left broadly swung behind Ed Miliband in order to defeat the New Labour continuation candidate, David Miliband. While Ed Miliband diligently tried to keep the party together and cover up the tensions, it was clear that a new chasm was opening up between the left and right of the party – this time focusing on austerity.

The 2010 defeat also alluded to the second dilemma faced by the Labour Party: what would its position be on the deficit and austerity? Miliband’s answer was broadly to fudge it – stressing that Tory austerity went too far, too fast. This argument did not wash with the public and, importantly, a growing number of Labour members.

Now, due to the Covid-19 crisis, the same problem will arise. Rishi Sunak has expressed the view that the huge amounts of money spent fighting the virus will have to be paid back. Corbyn’s pre-Covid-19 answer was a unifying message that unambiguously advocated anti-austerity measures. It was popular with many Labour members and saw a rebirth of Bennism as Corbyn, John McDonnell and other key figures of the Socialist Campaign Group set about revamping it for the 21st century.

Yet Benn was famously against the European Union, and the 2016 Brexit referendum triggered the left’s innate hostility to the European bloc. This highlights Labour’s third major challenge: how can you speak, economically and culturally, to those Leave voters who feel ‘left behind’, while simultaneously assuaging the pro-EU middle class and student supporters? Corbyn’s answer was to take a ‘seven out of ten’ position. It didn’t work.

Keir Starmer has now taken up the mantle. The new Labour leader faces three big challenges bequeathed to him: 1) keeping the party unified at a time of rapid socio-economic change – no mean feat given the leaked report on antisemitism; 2) taking a position on the looming deficit: support austerity or promise more spending to kick-start the economy; and 3) dealing with Brexit in a way that wins back Leave-supporters, but does not annoy the pro-EU, middle-class base. How Starmer deals with these problems will define his leadership. 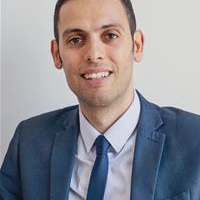 Dimitri Batrouni is a lecturer in politics at the University of Bristol and a Labour councillor for St Christopher's Ward.

View all articles by Dimitri Batrouni