New campaign group Momentum Renewal has launched its slate of candidates who will be standing in the upcoming internal Momentum elections that will see Jon Lansman step aside. 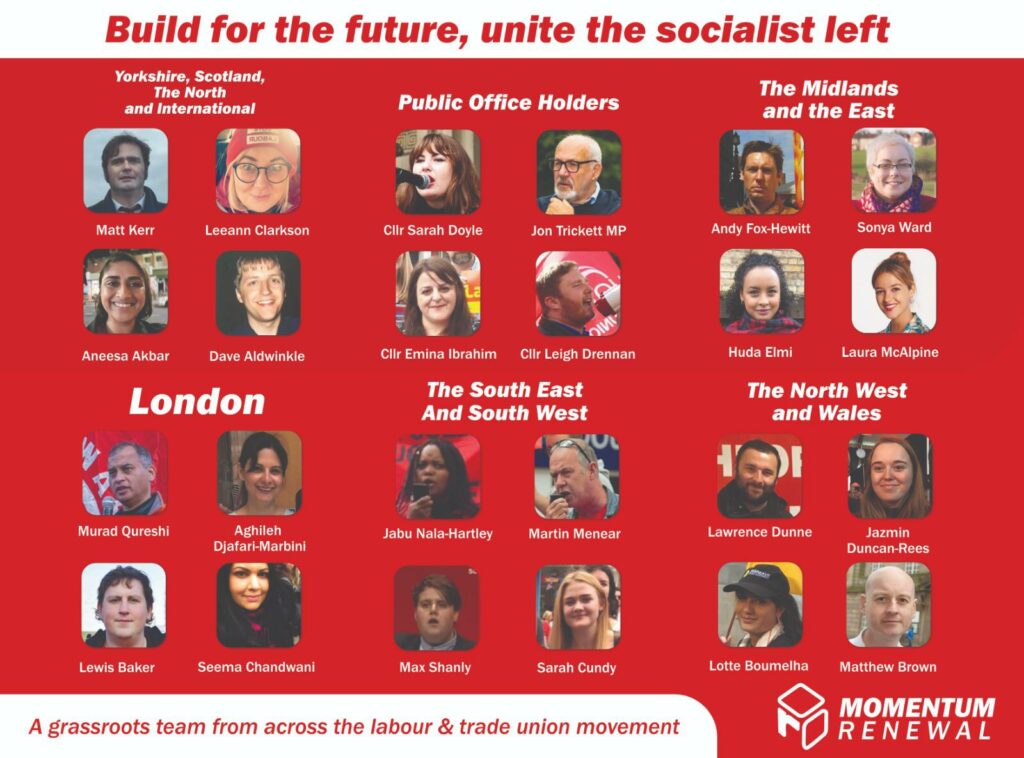 The Midlands and the East:

The North West and Wales:

Yorkshire, Scotland, the North and International:

The South East and South West:

Momentum Renewal has stressed the importance of “left unity” and ensuring that the organisation forms a “broad, socialist platform” that is “rooted in working-class communities”.

Its recent launch was backed by MPs such as Ian Lavery and Sam Tarry, several members of Labour’s ruling body, and high-profile writers including Aaron Bastani and Grace Blakeley.

Unveiling the slate, the group said: “We’re immensely proud to be putting forward a slate of such talent and diversity. Momentum Renewal brings together veterans of the union movement and McStrike organisers, building working class power for tomorrow.”

Renewal candidate Dave Aldwinkle commented: “In places like Leeds and Manchester, local Momentum groups have built the confidence of the Left by putting on scores of cultural events and political discussions.

“We have strengthened picket lines and built links with local tenants associations that can’t be broken. I believe this kind of activity can help build Momentum groups everywhere with a truly representative political leadership”.

Momentum founder Jon Lansman used a LabourList comment piece earlier this month to announce that he would not be standing in the internal elections of the Corbynite organisation.

Another group, Forward Momentum, announced its own slate for the contests last week following a process of open primaries with nearly 2,000 supporters taking part in the vote.

NCG nominations open today and close on June 11th, then a one-member-one-vote ballot will be conducted by Momentum from June 16th to June 30th. The process is entirely taking place online.