Ten years ago today, the BNP and their vile leader Nick Griffin became nothing more than a footnote in British political history. May 7th 2010 delivered a devastating result nationally for the Labour Party. Yet in Barking and Dagenham we still had a reason to celebrate.

Back in 2006, the BNP had elected 12 councillors to Barking and Dagenham Town Hall, having only stood 13 candidates. Had they stood candidates in all the seats that were being contested, we would have had the first BNP-controlled council in the country.

Back then the threat was very real as the BNP poured all their resources into taking over the Town Hall and gaining their first parliamentary seat. Voters were angry with Labour – especially on the issue of immigration – the Tories were still in the wilderness and people’s hostility towards the political establishment was cleverly exploited by the extreme right. We had a real fight on our hands. 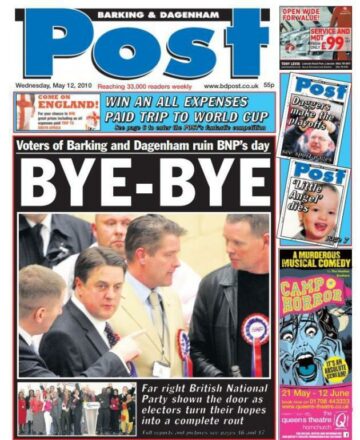 Fast forward four years and the BNP were resoundingly smashed. Nick Griffin came a distant third place, and I was re-elected with a majority of more than 16,000. In the local elections held on the same day, every single BNP councillor lost their seat as each ward returned a full slate of Labour councillors.

As we start to rebuild trust in Labour under the new leadership of Keir Starmer, what did we learn from our Battle for Barking in 2010 that remains relevant in 2020? Some of what we did then has become commonplace in many constituencies today. But as we start to climb the electoral mountain we have to conquer, it is crucial to work with a clear and sustained approach to campaigning in every constituency where we want to win.

Here are the top lessons I took from the Battle for Barking.

Every constituency is different, and the ‘Barking Model’ that defeated the BNP was developed when digital campaigning was still in its infancy. Yet much of what we achieved can still be adapted to fight and win future elections. Whether rebuilding support in Scotland, reconnecting with voters in the ‘Red Wall’ or winning back seats across the South East for the first time in more than a decade, candidates, local parties and Labour HQ can use these lessons so we are election-ready once again.

Margaret Hodge is MP for Barking.

View all articles by Margaret Hodge