Whilst the show of solidarity and empathy is welcomed from all walks of life from the British public, it will take more than lighting up civic buildings in purple and circulating online petitions to effect meaningful change in tackling racism both here in the UK and in the US. There is a need to strongly challenge the ingrained racism of police, particularly in the US, following the killing of George Floyd and thousands of other American Black people over the years.

What is needed is a solid stance and firm action from our own government to demand change from the US especially at a time when US-UK trade deals are being discussed. First, I would call for the immediate suspension of sales to the US of tear gas, rubber bullets and riot shields, which are being used forcefully against US citizens to suppress predominantly peaceful protests. The upcoming presidential and congressional elections in November are a real opportunity for the Democrats to make a stand against the treatment of Black American citizens by the police and other institutions.

On June 2nd, the #BlackoutTuesday campaign was started by the Black music industry, which precipitated an unprecedented worldwide outpouring of grief, anger and show of solidarity from a global community appalled by the way in which George Floyd was targeted and killed by a police officer. The very fact that some people are upset with the #BlackLivesMatter hashtag and its subsequent traction is testimony to how ingrained racism is, especially when people add ‘All Lives Matter’ to effectively downgrade the issue. The retaliatory racist #WhiteLivesMatter and #BlueLivesMatter campaigns were quickly drowned out.

Looking to our own house, our own Black history needs to be taught in our schools as well as the civil rights movement in America. Black history has been missing from school curricula, including race relations legislation (first introduced in the 1960s) and the changing experience of Black people over the decades, despite historical events still affecting Black British descendants today, as in the case of the Windrush scandal.

The publication of the Macpherson Report in 1999 following the murder of Stephen Lawrence was a watershed moment in the UK and highlighted the institutionalised racism in the London Metropolitan Police. Our own police forces need to be extra vigilant about prejudice, following decades of their institutionalised racism. Despite trying to actively recruit large numbers of BAME officers, very few have made it to the top ranks. This shows the unwillingness of our police forces to effect change and the measures needed. This attitude includes the indifference shown by institutions like the Police Federation, the Home Office and the Independent Office for Police Conduct.

As the actor Will Smith points out, racism hasn’t increased, the filming of it has. I would add that the apathy and reluctance to do anything about it has also increased. Look at the comments section of any local or national news story that features a BAME person and the vitriol is there in plain sight for all to see. Freedom of speech is used as a thin veil for the xenophobia and racism that runs rife on these channels and is being allowed to continue unchecked by social media companies. Those affected by this, me included, simply don’t pay attention to it, but the problem is that these individuals continue to find their kin, people who share their views, and they grow stronger in their beliefs. A few comments and upvotes can lead to indoctrination, which leads to incidents like the racist graffiti on our buildings and streets; escalating as far as full on murder, as in the case of my colleague Jo Cox, who fell victim to such an individual at the height of the Brexit referendum tensions in 2016.

This pandemic has demonstrated that there are scores of underpaid BAME employees who this country relies upon to do their (literally) dirty work. The government fought hard to delay publishing the Public Health England report, ‘Disparities on the risk and outcomes of Covid-19’. The report had a whole section redacted, according to the Health Service Journal, which is damning evidence of the government’s total disregard towards the BAME community. The section removed included responses from over 1,000 organisations and individuals who supplied evidence to the review, which concluded that discrimination and poorer life chances played a part in the increased risk of Covid-19 to those with BAME backgrounds. The final document makes no recommendations to prevent further loss of BAME lives – recommendations that could have saved many lives at the end of the week in which the lockdown was further lifted. NHS staff, doctors, nurses, ancillary staff, so many gave their lives unnecessarily and those deaths should also be investigated.

I am a mixed-race Black MP born in the late 1950s in the UK, prior to any race relations legislation, into a society beset with white privilege. Over the last 60+ years, things have improved slowly in the way many Black people are treated, but dehumanising people of colour still takes place far too often today. You do not become immune to racist behaviour however high up the social ladder you climb, however much you may earn, however much respect you gain in your profession. There are numerous shades of racism, and rather than disappearing the higher up you go, it gets more subtle, covert and sophisticated.

We need more positive Black role models. I specifically say Black and not Asian, because all too often the BAME tag is applied as a one-size-fits-all plaster to numerous issues. For example, Asian people from Indian heritage background are overrepresented in the higher medical and dentistry sector in the NHS and I suspect in the private health industries too; at the same time, the male Black population is overrepresented in the prison population.

The unfair treatment within the justice system bears out these statistics. Since 1990, every single case of a BAME death in custody where force was used has ended in acquittal. More recently in the case of Belly Mujinga, the London transport worker who died shortly after being intentionally spat on, ended with no charges being made by the British Transport Police. Whilst the perpetrator tested negative for Covid-19, he could have been charged with common assault, but no further action was taken because the BTP said there was insufficient evidence that the man spat deliberately. The Crown Prosecution Service has been asked to review evidence, but the case is not being reopened.

It is not just the police forces that need to take a long hard introspective look at how to dismantle structural racism. I don’t believe that anyone should be put at the top of an organisation just because of the colour of their skin, but I do believe barriers for marginalised communities should be aggressively removed. That can be achieved by tackling poverty and health inequalities, raising educational standards, increasing aspirations, encouraging positive BAME role models and challenging racist recruitment panels who stem the upward flow of perfectly good BAME candidates because they do not ‘fit’ into the company culture.

We need to encourage our media to showcase more of the UK’s positive Black role models. Instead, what we see in the main is the adoption of negative Black film and music role models into UK Black culture, with one or two exceptions. I believe this is doing much to damage the life chances of young Black men and women in this country. The continual damaging representations of Black individuals with negative stereotypes, such as gangsters, single parents or absent fathers is not a true portrayal of Black individuals here in the UK.

We should be portraying more Black individuals as positive role models through our media channels, such as award-winning actors, world class sports people, top doctors, surgeons and business leaders. Perhaps then, Black people in this country can be perceived differently from common stereotypes and treated with the dignity and respect that everyone deserves. But sadly, many of our Black leading lights find themselves having to go the US as they find little work in the way of prominent or positive roles in UK media productions.

Racism has bedevilled our societies through the generations, but the economic, social and health inequalities highlighted by the coronavirus pandemic have exposed racism in a way humanity has never seen it before, principally through modern media. Long after this crisis is over, we will be judged on how we sought to eradicate the virus of individual and structural racism by dealing with the conditions that have created it. We need to move away from purple lights towards a purple patch for all Black people. We can only do that by working together as a society through mutual self-interest and co-operation, and by challenging the divisiveness we see from our current government and the one on the other side of the Atlantic. 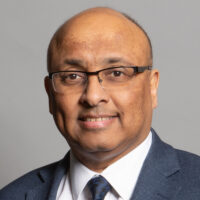 Sir Mark Hendrick is the Labour and Co-operative MP for Preston.

View all articles by Mark Hendrick