As a lifelong trade unionist, I’ve been heartened to see recent headlines announcing huge increases in trade union membership over the past year – up by 100,000! The coronavirus pandemic and weak government response in particular has given unions a new lease of life in our national discourse as schools, care home and hospital staff seek protection from poor employer practice and safeguarding.

Despite positive headlines on union membership now, we cannot ignore the chronic decline seen since the 1970s. Including the latest increases in members, there are 6.2m trade union members in Britain today – 26% of the workforce. This is still above the EU average of 23%, but less than half the strength of our movement at its height.

Trade unions were once bastions of the labour movement’s power, boasting 13 million members at the end of the ’70s. Political education for many working-class people began in the workplace; the trade unions themselves gave powerful, practical lessons in solidarity, and their political education programs embedded knowledge of the history and theory behind the labour movement. They were living, workplace academies creating new organisers, producing new orators and leaders, and training people for struggle.

Regular victories from industrial action were direct examples for working people of their collective power, and trade unions – themselves developed alongside working class communities through over a hundred years of industrialisation – were deeply embedded into the cultural consciousness of millions.

It is no surprise that Margaret Thatcher saw trade unions as the most potent threat to the unrestrained power of capitalism in Britain, and that she devoted so much of her life to destroying them. With them, she also destroyed a rich history of community, self-sacrifice, discipline and knowledge which had existed in those communities. Trade unions that once ran working men’s clubs, held annual galas and provided their own welfare networks for those out of work were woven into people’s lives.

The loss not only for the left, but for our society, is incalculable. It is difficult to overstate how much knowledge and tradition was embedded into the lives of the millions who participated in trade unions; how much the struggles of the past were handed down to new generations, equipping them for the struggles of the present and future. But sadly much of that has died out. What remains in many former strongholds is little more than a general sense of the importance of the collective, and a residual habit of voting for Labour.

Existential questions remain for the future of trade unions in Britain, now facing some of the most oppressive anti-union laws anywhere in the developed world. Unionised workforces are still safer and better paid than non-unionised workplaces, but can unions be used to win the victories for working people that gained us our loyalty and commitment from them in days past?

There is evidence that parts of the trade union movement are rising to the challenge, using a mix of the old and the new. Campaigns that organised precarious workers in McDonalds, TGI Friday’s and Wetherspoons have been great examples of trade unions responding to the new world for workers. And the CWU’s “Rise Like Lions” campaign to defend postal workers combined an excellent social media campaign with good old fashioned workplace power.

In amongst the general decline in TU membership over the last 40 years, the public sector is still leading the way in organised workplaces. My own union, PCS, has came through some of the most aggressive attacks on a single trade union since Thatcher’s assault on the National Union of Mineworkers, as the Tories targeted its socialist leadership with assaults on their finances and facility time. PCS has not only survived but has emerged stronger and more focused on workplace organisation.

A great part of the work we need to do will, I feel, come down to the commitment that the broader Labour left gives to helping rebuild that movement. It has not gone unnoticed by many of us old-timers that the Labour membership surge of the past few years has not translated into a corresponding surge in union membership. The Labour-union link often feels as much a tick-box exercise for would-be candidates, or a bureaucratic exercise in winning delegates on committees, than it does an organic connection between organised working class people and the party.

Whilst many other movements have blossomed – and a whole new generation has been exposed to the general political framework of the left – we have yet to turn that enthusiasm into workplace organising, tackling capitalism at the source of its power. This is one of the main reasons I am standing for election to Momentum’s national coordinating group on the Momentum Renewal slate – to make sure our movement is connecting up the dots between mobilising new people and creating organised, knowledgeable and long-term working class socialists out of them.

I have spent most of the last 15 years of my life working as a PCS union rep, running one of the best-organised workplaces in the union and serving as a member of the national executive committee. For me, it’s a huge priority to ensure that trade unions retain an intimate connection to organisations of the left such as Momentum, and that the alliance between unions and the left – which allowed the Corbyn era to take place – are able to continue. This is a task that will take more than words to complete.

Momentum needs to start seriously mapping our trade union members and providing them support in organising through their branches. We need to share our skills in campaigning and organising with activists, roll out education on unions and their role in Labour history, and make sure that the principle of organised workers power stays close to the heart of our activity.

I want to see trade unions given a proper institutional stake in Momentum – a permanent seat at the table and close connection to the way we organise. I believe that unions carry the moral and political weight to cohere the left now Corbyn is gone – and such a partnership is essential if the left is to continue to thrive.

And I want to see the fantastic mobilisation work performed by Momentum – the enthusiasm, new organising methods and new activists – put to the task of organising working people in their workplaces. We can play our part in getting young people active in their unions and can contribute to the excellent work which has been done in getting more socialist women in leadership roles.

We live in an era of great opportunity for the trade union movement, opportunity that cannot be allowed to dissipate. Only swift, dedicated and determined action will ensure that the potential of this moment is not lost. 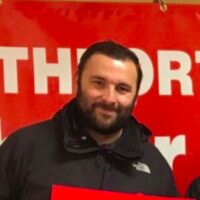 Lawrence Dunne is secretary of Knowsley for Socialism and a former PCS national executive committee member.

View all articles by Lawrence Dunne