The latest net satisfaction score achieved by Keir Starmer – now at +31 according to Ipsos MORI – is the highest score attained by any leader of the opposition since Tony Blair in the mid-1990s.

The new Labour leader, who took up his post at the start of April, has been given a boost by the fresh polling data that shows 51% of Britons are satisfied with him and 20% dissatisfied, with 29% saying they don’t know. 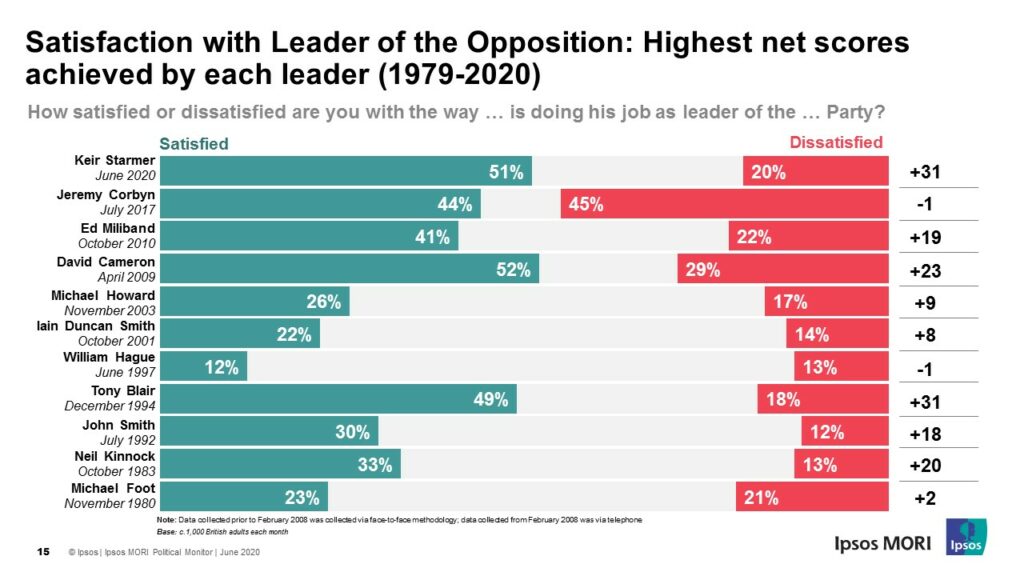 The net satisfaction score reached by Starmer in the new poll is better than any opposition leader for four decades apart from Blair, who scored the same in December 1994 before Labour won a landslide in 1997.

NEW: Keir Starmer scores the highest satisfaction ratings *ever* of an opposition leader on record, equalling Blair’s record of +31 in Dec 1994.

Labour goes from the opposition leader with the worst ever ratings to one with tied best ratings! pic.twitter.com/xQmO1RHGkw

BUT: Starmer has a lower lead over Johnson’s ratings than Blair did over Major or Cameron did over Brown at their peak ratings, and it is these relative ratings that matter most in elections. pic.twitter.com/02WBFKqaeJ

The Conservative Party is still ahead on the headline indicator of voting intentions, though the gap has narrowed to five points as 43% say they would vote Tory and 38% opt for Starmer’s Labour.

Asked who would make the “most capable” Prime Minister, Johnson is also still leading with 43% compared to Starmer on 38% – aligning exactly with voting intentions for their political parties.

The Prime Minister appears currently to have more cross-party appeal, as 9% of Labour voters say Johnson would be “most capable” of the two while only 2% of Conservative voters say the same about Starmer. 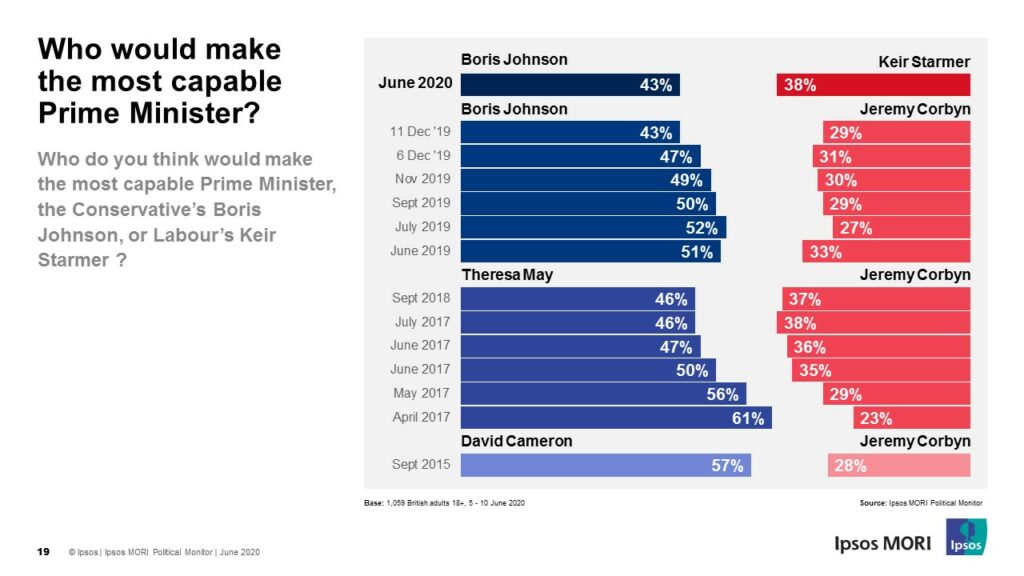 Net satisfaction ratings for Boris Johnson and the government are both negative, at -1 and -11 respectively, while Starmer is on +31 compared to predecessor Jeremy Corbyn who scored -49 in March.

Commenting on the findings, Ipsos MORI’s Gideon Skinner said: “Labour will of course be encouraged that Keir Starmer is achieving comparable leader satisfaction ratings to Tony Blair and David Cameron when they led the opposition, as both went on to become general election winners.

“However this is still very early days – it’s not unusual to see a honeymoon period for a new leader. And there is an important difference – Boris Johnson is still more popular than John Major and Gordon Brown were when Blair and Cameron achieved their best scores.”

The research indicates that the British public is starkly divided over the government’s response to the coronavirus crisis. 40% says it is handling the pandemic well, while 44% says it is doing badly.

It also touches on another reason for concern within Labour and optimism for Conservatives: a net total of +46 say Chancellor Rishi Sunak, tipped as a potential future Tory leader, has handled the crisis well.

The positive response to Sunak is despite poor economic forecasts, an overwhelming majority predicting that the economy will get worse over the next 12 months and many falling through the gaps in government coronavirus support schemes.

Ipsos MORI interviewed a representative sample of 1,059 adults aged 18+ across Great Britain. Interviews were conducted by telephone between June 5th and 10th. Research was undertaken for the Evening Standard.