The looming annexation of the West Bank means there is much for me to do as the new chair of Labour Friends of Palestine and the Middle East (LFPME). When we talk about Palestine in the Labour Party, we’re talking about many things: the plight of refugees displaced for decades, the ongoing illegal blockade of Gaza and of course, the scourge of illegal settlements peppered across the West Bank – to name just a few.

Since my visit to the Occupied Palestinian Territories (OPTs) after my election, I’ve raised my concerns time and again about the conditions facing Palestinians and the huge violations of international law and human rights that I witnessed. And now that situation feels even more dire, with the looming illegal annexation plans of Israeli Prime Minister Benjamin Netanyahu. Perhaps this is the most relevant moment to take my campaigning further, and I’m looking forward to doing so as I take on the mantle as chair of LFPME.

LFPME has become an integral force for campaigning for Palestinian rights and dignity within the Labour Party for more than ten years, and has enjoyed the support of a majority of the Labour MPs for much of that time. As an organisation, we bring forward the voices of Palestinians to raise their concerns amongst Labour colleagues, to work with the party to hold the government to account and to call for respect of international law and human rights.

Working across the Labour Party with MPs, peers and members up and down the country the organisation has raised the profile of many issues – from campaigning to secure recognition of a Palestinian state, now party policy, to tabling debates on key issues in Palestine such as house demolitions and the growing threat of illegal settlements. We’ve worked on many challenging issues over the years, from the attacks on Gaza to the military detention of children, but now there is an even more pressing need to oppose the planned illegal annexation of settlement areas in the OPTs.

In the last few weeks, many MPs have been calling on Prime Minister Boris Johnson to go further than just raising concerns with the Israeli administration about their plans, and a few weeks ago more than 149 UK politicians signed a letter that backed a call for sanctions if the annexation plans go ahead. In the House of Commons, on June 16th, Johnson opposed the annexations plans and said that it would be a breach of international law – but now, more than ever, is an important time for strong leadership to oppose these plans.

With the strain of the impact of Covid-19 being felt across the OPTs and the Gaza Strip, it’s a stark reminder of how vulnerable these communities are. We need to do more and as LFPME we want to go further to ensure that Labour has an even more progressive policy on Palestine.

Lisa Nandy’s tenure as chair helped to grow and strengthen LFPME, and I’m looking forward to taking this further and working closely with Lisa in her new role as Shadow Foreign Secretary. Indeed, her recent announcement that the Labour Party is calling on the UK government to support “a ban on goods entering Britain from the illegal settlements in the West Bank” echoes the calls that LFPME has been making.

We face unprecedented challenges now that we need to respond to in new and innovative ways. I’m keen to get this work going and I’m looking forward to taking LFPME further and helping the organisation achieve even more. We have much work to do, and now is the time to get going. 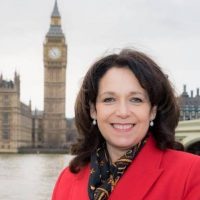 Julie Elliott is Labour MP for Sunderland Central. She is also chair of Labour Friends of Palestine and the Middle East and chair of the all-party parliamentary group on digital skills.

View all articles by Julie Elliott