Following the drastically reduced dividend payments from BP (down 50% in the second quarter) and Shell (down 65% since the start of the year), it is clear that local government pensions funds must divest from fossil fuels. As pay outs decline rapidly and it becomes increasingly likely that these companies will never be able to use all their resources, there can be no more excuses. If councils leave it too late to divest, it will be the taxpayer who must ultimately bail them out.

When the price of coal collapsed in 2015, UK local councils lost a combined £683m to their pension funds. Today, local government pension funds are just as exposed to the collapse of fossil fuel prices. The average council has around 7% of their entire fund invested in such companies. BP and Shell’s poor performance follows similar announcements by Total, who last month announced an $8bn write-down of its most carbon-intensive fossil fuel assets. Regardless of the moral arguments for divestment, even from a purely financial point of view, now is the time that councils should be planning to sell their shares.

89 Labour-controlled district, metropolitan and unitary councils have declared a climate emergency. Yet few included divestment in their motions, and only 13 councils led by any party have made full or partial divestment commitments. Labour councils had taken the lead on this when Oxford City Council became the first UK local authority to introduce a fossil fuel divestment policy in 2014 and Waltham Forest being the first in the UK to divest.

But the pace of action by other Labour councils has not kept up. Last month the Conservative-led Shropshire County pension fund committed to divest their £294m of fossil fuel shares, including Shell and BP. The council cited their declaration of a climate emergency, the superior performance of renewable investments and the financial risk posed to fossil fuels by the Covid-19 crisis and the forthcoming energy transition as their reasons for doing so. Labour councils that fail to act are increasingly behind the times.

Nest, Britain’s largest pension scheme by number of members, announced recently that it would toughen up its climate change investing policy and aimed to fully decarbonise its portfolio by 2050. Recently it appears that divestment has become appealing to groups who have not been eager to take such action over the last five years of the movement. The financial arguments alone seem to be swaying some of those previously not interested, alongside those committed to the environment argument.

Yet there is still resistance in the majority of Labour councils and although the Labour Party, including leader Keir Starmer, is an enthusiastic supporter of Divest Parliament – and the main local government union UNISON supports divestment – there is no corresponding support for councillors from the Labour Local Government Association.

Labour Councillor for Beeston & Holbeck and lead member for pensions for Leeds City Council Andrew Scopes, who has been engaged in a long-term struggle with other councillors on the West Yorkshire Pension fund, has said: “It is time for local government pension schemes, such as mine, which is holding hundreds of millions of pounds worth of shares in Shell and BP that are worth less every day, to start the transition away from this kind of investment to protect members and local authorities from the worst of the financial impact when the economic way to generate power is no longer by burning fossil fuels.”

Founder and executive chairman of the Carbon Tracker Initiative Mark Campanale said: “Incumbent fossil fuel dependent energy companies are facing an existential crisis that challenges their future… Businesses that can’t change, or won’t change, risk being ‘left behind’ as their assets are financially ‘stranded’.  When this happens, a rational response is for investors to sell the risk. Divestment is simply a logical extension of risk management. Those reluctant to confront what is happening to the sector is similar to believing that canals would survive when faced with the rise of railways; that DVDs would survive live-streaming; or that the Olivetti type-writer would survive the arrival of the personal computer.”

All councils that have not already divested should be at least asking their pension fund committee:

Councils have seen budgets cut by almost 60% in the last decade. The current difficult financial situation will only get worse. They could be using the money they have divested to reinvest in vital services. 42% of all internal investment in the UK comes from pension funds. Islington has invested over £150m from their pension scheme into social housing. Lancashire Council’s pension fund invested £12m in Westmill solar co-op in 2013;. Councils in London and Manchester have invested in wind farms. All these kinds of community wealth building investments offer much more stable returns than fossil fuels can offer. The LGA and the Association of Labour Councillors urgently need to offer training and support in what is a very complex area, which even experienced councillors find hard to navigate.

Together Platform London, Friends of the Earth England, Wales and Northern Ireland and Friends of the Earth Scotland run the Divest Local Government Network. They offer support to councils and local campaigners that want to push for change. Get in touch if you would like advice or them to help support your campaign: [email protected]. 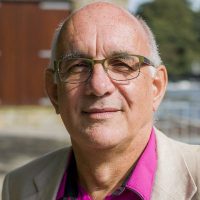 Kevin Frea is Lancaster City Council's deputy leader and a council cabinet member. He is founder of Climate Emergency UK.

View all articles by Kevin Frea