Labour is warning that the Prime Minister has “failed to keep the promise he made to victims of terror” as expected government funding for a Warrington-based educational peace charity has not materialised.

The Tim Parry Johnathan Ball Peace Foundation, set up by Colin and Wendy Parry after losing their 12-year-old son Tim and three-year-old Johnathan Ball in the 1993 Warrington bombings by the IRA, works for peace.

The charity has provided a free national support service for victims of terrorism in the UK, including trauma-informed health and wellbeing services, for two decades. But its future has now been left in doubt.

Labour’s Shadow Secretary of State for Northern Ireland Louise Haigh will join new Warrington North MP Charlotte Nichols on a visit to the centre today, where they will meet with employees and discuss their work.

Commenting on the lack of funding, Haigh said: “The Prime Minister has failed to keep the promise he made to victims of terror and to the peace foundation, and this failure risks removing vital support for victims.

“It is frankly insulting to victims, that at the same time the service they rely on is placed into doubt, a life peerage carrying with it a £313 per day allowance is awarded to Claire Fox who steadfastly refuses to apologise for defending the Warrington bombings.”

Reiterating the demand already made by deputy leader Angela Rayner, the Northern Ireland spokesperson added: “The Prime Minister can, and must, block her peerage and he can and must secure the future of the foundation.”

The Centre’s chief executive Nick Taylor said: “Terrorism is a crime that requires specialist niche support for the long-term. This is not general victim support and is a key component part of the UK’s counter terrorism strategy.

“We have provided that service for two decades. The decision to cease funding in March needs to be reviewed as the care we provide must be secured for the long-term.”

Offering reassurance to the local MP, Johnson replied: “I certainly commend the work of all those working on the Warrington Peace Centre, and we will do everything we can to ensure that funding continues.”

But at the end of July, the foundation tweeted that its funding had “stopped… at the end of March”, adding that “we are only continuing our service due to the support of a private philanthropic individual. In normal times it would be a national scandal”.

It was revealed last week that former Brexit Party MEP Claire Fox had been nominated for a peerage and will sit in the House of Lords as a non-affiliated member. Labour has described this as an “insult to the people of the North West”.

Rayner said: “The awarding of a life peerage to someone who has repeatedly refused to apologise for her support of the heinous IRA bombing attack in Warrington in 1993 has rightly caused revulsion and real hurt both in Warrington and across our region.”

As a Revolutionary Communist Party activist, Fox refused to apologise for suggesting that evidence of the Bosnian genocide was faked. The RCP also defended “the right of the Irish people to take whatever measures necessary in their struggle for freedom”.

In a statement released by Fox following the peerage nomination, she said: “Contrary to what has been reported elsewhere, I do not support or defend the IRA’s killing of two young boys in Warrington in 1993.

“I have not mentioned the horrific times of over 23 years ago since then and do not believe there is any justification for violence in Ireland today.

“The killing of Johnathan Ball and Tim Parry was a terrible tragedy. The 1994 IRA ceasefire and the 1998 Good Friday Agreement drew a line under the conflict. It’s surely time to move on.”

The Warrington bombings were two attacks that took place in February and March 1993. The first targeted a gas storage facility, causing no injuries; the second saw two bombs explode in litter bins resulting in injuries and loss of life. 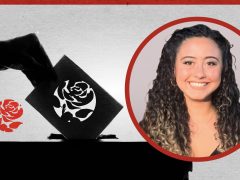