This month sees television licence demands drop on the doorstep of several hundred thousand pensioner households in the UK – the direct result of the Tories’ decision to foist the cost of over-75s’ TV licences on the BBC as part of the last charter renewal. It had been another great achievement of the last Labour government to exempt over-75s from paying the TV licence. And what a lifeline it proved. Figures from Age UK illustrate that, contrary to the assertion that older people are well-off, 29% of over-75s live in poverty or just above the poverty line. And 38% of over-75s – that’s 2.1 million people – agreed that television was their main form of company.

When in 2015 the Tory government forced the BBC to take on responsibility of the over-75s’ licence fee as part of a charter renewal that also included a cut of £800m to the BBC’s budget, it was always going to be an impossible challenge. Carrying the overall cost of the universal licences would have topped £745m. In practice, this would have meant closures of BBC Two, BBC Four, the BBC News channel, the BBC Scotland channel, Radio 5 Live, and a number of local radio stations.

But this is not just about cash. It is part of a wider attack on the BBC, and indeed the treasured institutions of the UK that the destructors in Downing Street have in their sights. And the modus operandi is always the same, whether it is the BBC, the NHS, local government or local services such as fire and police: cut the funding, then attack that public body when it can’t deliver the same level of service; or attack it when – as in this case – it has to increase fees to maintain that service.

They undermine confidence in the public body and its ability to serve the public and so make it ripe for abolition, reform or privatisation. And that’s exactly what’s going on here with the BBC. Tory attacks on its credibility are mounting, aided and abetted by their friends in the right-wing press, ahead of an attack on its independence and viability. Because in a media landscape where there is already too little independence – independent, that is, of the Tory Party – attacking the BBC’s and our other public service broadcasters’ budgets is the only lever the government has to control the capacity to ask tough questions on behalf of the British people.

My heart sinks whenever I see Labour members sharing memes demonising the ‘mainstream media’. The BBC does not always get it right. Too often its political coverage reflects the status quo, its interpretation of impartiality has led it to give unnecessary air time to climate change deniers and others in the pursuit of balance, and it struggles to grasp and report on political shifts at the grassroots.

But if you find yourself forensically analysing every tweet by Laura Kuenssberg for bias, never mind tweeting abuse at her, then it may be time to reassess your priorities. We must never fall for the trap that says the BBC and other public service broadcasters are part of the problem. Because the Tory plan is clear: destroy the funding and then the credibility of the BBC, commercialise it – which in turn takes huge sums away from other broadcasters – and leave a situation where only billionaires can afford to run TV channels. A British version of Fox News, if you like.

The BBC is not perfect. It is often its own worst enemy and rarely blows its own trumpet of success. As a truly independent broadcaster, then, we must accept that it will criticise or attack Labour from time to time. That is the price of living in a democracy with a genuinely free broadcast media. And we should not want or expect anything else. So don’t get conned by Tory attacks. Don’t get seduced by memes on social media that trick you into doing the Tories’ dirty work. The BBC is more than the last politics report you saw, it makes a massive contribution to our nation’s cultural life, our creative industries and our cohesion as a society. Because the only alternative to the BBC is not a workers’ paradise broadcasting collective. It is a British Fox TV. Don’t fall for it. 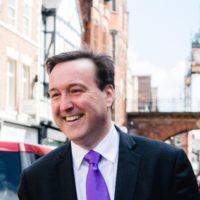 Chris Matheson is the Labour MP for City of Chester and shadow minister for media.