Anneliese Dodds is expected to set out “three steps to a better, more secure future” with an alternative economic plan from the Labour Party to “recover jobs, retrain workers and rebuild business”.

In her speech to Labour’s online conference on Monday, the Shadow Chancellor will outline an approach to see government work “hand-in-hand with business and trade unions, in the best interests of our country”.

The Shadow Chancellor will contrast the flexible and targeted response called for by Labour to what the opposition has described as the government’s ‘one-sized-fits-all’ approach. The three steps include plans to:

The Shadow Chancellor will say: “This is an ambitious Labour vision – where security and fairness aren’t just aspirations, but where they are a reality for families and communities across our country.”

She will argue that Labour can provide new leadership so that people have “hope for the future, with a government that they can trust, not one which plays political games”.

Dodds will also commit to restoring trust with business. She is expected to say: “I understand what a critical role business plays in creating jobs and supporting livelihoods across the country.”

Alongside Dodds’ address to the online conference, the party has published a “file of failure” that exposes the money wasted by the Conservative government’s handling of the Covid crisis. Labour has highlighted that:

“Taking on the tax dodgers, going toe to toe with the tech giants, lifting the lid on shell companies and stopping speculators from driving up prices for ordinary people.

“While the Chancellor was profiting from a financial system that took huge risks and then passed them onto ordinary people, I helped to rein it in.”

She will criticise Rishi Sunak for handing public money over to business “with no strings attached” in contrast to more careful and conditional approaches taken by other countries in their economic responses to the Covid pandemic.

The French government earlier this year gave €7bn to Air France, but made the funds conditional on the company achieving a 50% reduction in carbon emissions on domestic flights by 2024 with the use of more fuel-efficient planes.

Labour’s spokesperson on the economy will slam the Chancellor for what she describes as a “cavalier” attitude to spending public money and contrast it to a “responsible approach to the national finances” that she would pursue.

The analysis by the party in its “file of failure” identified hundreds of millions of pounds of public funds that Labour argues has been wasted in the pandemic, from the “failed tracing apps to useless personal protective equipment”. 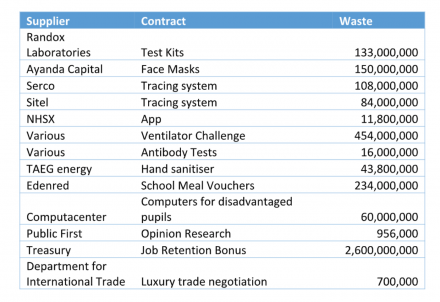 The opposition has repeatedly criticised the government on outsourcing. Jon Ashworth told Matt Hancock recently: “The lesson of this pandemic is that surely money would be better spent on local public health, not more outsourcing firms?”

The Shadow Health Secretary subsequently slammed the government for what he described as “rewarding private sector failings” following persistent reports of low levels of Covid tracing achieved by companies such as Serco.

Commenting ahead of Dodds’ speech, TUC general secretary Frances O’Grady said: “The pandemic is not scheduled to end in October – neither must support for jobs. The cost of mass unemployment will be far higher.

“We need a job protection and skills deal to protect businesses with a viable future. It should keep people in work on short hours, with the remaining time used for training.

“This will keep our economy in a stronger state for a faster recovery. And it will rescue millions from the misery of unemployment.”

The general secretary used her speech last week at the TUC Congress 2020 to issue a personal challenge to Sunak, telling the Conservative Chancellor: “Stand by working families – don’t walk away.”

The Shadow Chancellor’s address follows comments from the Scottish Labour leader Richard Leonard on Sunday, who called for a targeted furlough scheme that “takes into account the requirements of the Scottish economy”.

Dodd’s speech on Monday will form part of Labour’s online conference. The usual conference was cancelled this year due to Covid. The virtual replacement is running events for Labour members over the next few days through to September 22nd.