At a Labour ‘Connected‘ fringe event alongside Shadow Home Secretary Nick Thomas-Symonds today, Lammy slammed the government for departing from the consensus on “evidence-based, intelligence-based stop and search”.

“We remain very concerned at women in prison. I have to say personally I am yet to meet a woman who is in prison not because of a man who has abused her, who has pimped her, who has made her run drugs.”

He also highlighted the 2017 Lammy Review, in which he examined racism in the justice system, at the event this afternoon. The report gave 35 recommendations to the government, most of which have not been implemented.

He added: “Yes, we managed to reduce the number of young people in prison, but I know that Labour members will be very concerned that the number of BAME children in prison has risen from 41% when I did my review to a staggering 51% today.

“That is extraordinary when you consider that ethnic minorities make up 14% of the population.”

On probation, Lammy said: “We believe that probation should be a national service and we absolutely believe in rehabilitation. Reoffending rates are the highest on record and certainly the highest in Europe.”

“Under this government, it’s not working, prison certainly isn’t working and there is much more for a Labour government to do, not just in opposition, but when we actually get into office.”

Former Tory Justice Secretary Chris Grayling privatised the probation system in 2013, but a report in 2018 labelled the move an “unmitigated disaster”. The government has since decided to renationalise the probation service at a cost of £437m.

The opposition frontbencher discussed the effect of austerity on the justice system, saying that a backlog of 37,000 cases, the closing down of courts and overcrowded, underfunded prisons is the “legacy of the Conservatives”.

Stop and search tactics in the UK have drawn significant criticism. Recent research has shown that Black people in the country are 8.4 times more likely to be searched than their white counterparts.

On diversity in the justice system, Lammy said: “Let’s just be clear, I don’t think any of us believe that diversity per se fixes the challenges that Nick talked about in relation to institutional racism.

“If that were the case there wouldn’t be problems in the LAPD or the NYPD. We do say, particularly where we are talking in this country about ethnic minorities that without that diversity it’s very hard to build trust.”

Lammy later highlighted how just 1% of UK police officers are Black and said that although progress has been made by police forces in London, lots of work is still needed outside of the capital.

Today’s event formed part of Labour’s online conference. The usual conference was cancelled earlier this year due to Covid. The virtual replacement is running events for Labour members over the next few days through to September 22nd.

Andrew Kersley was a LabourList reporter. 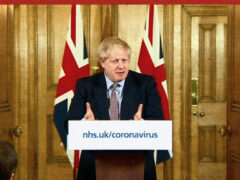