A few clear-sighted Americans anticipated this moment 80 years ago. Henry Wallace, US Vice-President during the Second World War, said in 1944: “When and if fascism comes to America it will not be labelled ‘made in Germany’, it will not be marked with a swastika. It will not even be called fascism; it will be called, of course, ‘Americanism.’”

Until quite recently, it was possible to persuade ourselves that the moment had not come, but it is now unmistakeable, and not just in America. The people we euphemistically call populists are, if words mean anything, fascists and neo-fascists.

In London last weekend, the old British Union of Fascists flag was unapologetically on display in Trafalgar Square at the anti-mask demonstration – the first time it has been seen in public since the 1930s. Thugs go to the hostels where asylum seekers are kept to bully and harass them. In the US, the footage of uniformed Americans beating up and killing Black people could come straight out of 1930s Berlin.

Neither Britain’s Labour Party nor the US Democratic Party has yet faced up to the starkness of the choices they now have. The time for seeking the best was yesterday, and perhaps tomorrow. Today is a time for fighting off the worst. We could be about to bequeath a fascist world to our children.

The parallels with the 1930s are as plain as a fiery cross in the hands of a Ku Klux Klansman. Democratic countries are falling to pale imitations of Donald Trump: Viktor Orbán in Hungary, Jarosław Kaczyński in Poland, Recep Tayyip Erdoğan in Turkey, and yes, Boris Johnson in Britain and Benjamin Netanyahu in Israel. And the left is behaving just as it did in the 1930s, which is why Trump could well be re-elected in November, with an obedient acolyte in Downing Street at least until 2024.

Take the Trump rallies, muted now by the virus. We haven’t seen a speaker openly encouraging his stewards to beat up opponents since Oswald Mosley’s 1936 taunt at Olympia that hecklers would be met with the “courtesy” of “the British fist”.

Take the lies, which come straight out of Joseph Goebbels’ playbook. “It would not be impossible to prove with sufficient repetition and a psychological understanding of the people concerned that a square is in fact a circle,” wrote Adolf Hitler’s propaganda chief, and he went on to prove it. Trump adopted this method. Does America have more cases of the virus than anyone else? Say there are fewer than anyone else. “The ignorant peasants will buy it,” said key Kaczyński strategist Jazek Kurski.

Take the racism. We have not yet seen Trump’s Auschwitz, but we see how he treats America’s non-white population, how little he values their lives and how keen he is to keep them in their place.

Take the violence. Hitler used to send in the SS to create violence that he could blame on Jews and Communists. Why has Trump sent the National Guard to towns and cities that already have police forces?

In Britain, tame newspapers branded the judges who defied Boris Johnson as “enemies of the people” and Johnson went into the 2019 election with this chilling threat: “After Brexit we also need to look at the broader aspects of our constitution: the relationship between government, parliament and the courts…” The civil service looks set to be remade in Dominic Cummings’ image. When Johnson was Foreign Secretary, our US Ambassador was effectively fired on the instructions of President Trump.

Trump himself has so little respect for democratic forms that he has refused even to confirm that, if defeated in November, he will accept the verdict of the people. He is also transparently trying to ensure that his opponents do not get the chance to vote.

This is not just Thatcherism and Reaganism magnified. Margaret Thatcher and Ronald Reagan, by demeaning and running down the public sector, helped create the conditions in which the new fascists could thrive. But what we are seeing now is something new and dreadful.

Should we take comfort from the fact that the new right come out of mainstream democratic parties? The old Republican Mike Pence is a politician we recognise, from a revered political pedigree. But so was Franz von Papen, the old Prussian aristocrat who was Hitler’s first vice chancellor in 1933. The old German politicians thought it worth attaching themselves to Hitler to maintain the power of the conservative establishment.

Of course, it is not exactly the same as it was in the 1930s. Hitler wanted a corporate state. The new fascists want corporations to run the state. But fascism is back. The worst news of all is that the left are behaving very much as the left throughout Europe did in the 1930s – by turning on each other. The Communists thought the social democrats were their real enemy, while the social democrats were preoccupied with respectability.

Today the Democratic Party has gone for respectability, and the American left questions whether they can vote for Joe Biden at all. In Britain, the Labour Party governed from the right, while the remains of the Communist Party found a seat at Jeremy Corbyn’s table, and played into the hands of the extreme right by supporting Brexit. They are still engaged in a pointless debate about whose fault the 2019 defeat was. The left is fiddling, and the enemy is at the gate. 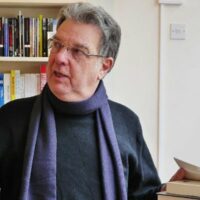